After 90 days on the continent it was time, by law, to say good bye to most of Europe for 90 days but luckily neither the United Kingdom nor Ireland participate in that part of Schengen. On June 3 we flew from Lanzarote in the Canaries to London.

Spain on our way from the Canaries to England

(Just to clarify terms here:  the United Kingdom is made up of England, Scotland, Wales and Northern Ireland.  That is different from Great Britain, which is just the island and is made up of Wales, England and Scotland.) We chose an Airbnb in the tiny village of Alverstoke, next to Gosport, which has been a spectacular base for us. It’s a great location, a few steps one direction to the post office and a few steps the other to a large convenience grocery and a pub across the street. 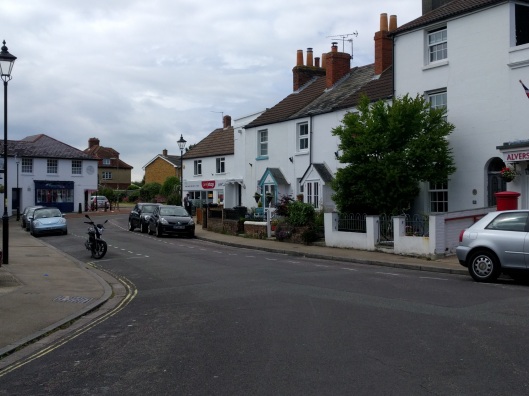 The blue door is the entrance to our cottage, conveniently located between the post office and a large convenience grocery.

In addition to the proximity to public transportation another reason we like our current location is that we’re only a ten minute walk to the sea.  The weather hasn’t been great summer weather, but it’s been decent. (And the resulting flowers and bushes are amazing!) We’ve had rain but never a day (yet!) where it’s rained all day.

Even the rain comes with its own gifts!

To get to the ocean it’s a pleasant stroll through a residential neighborhood and we find it enjoyable to sit on a bench and read or sit at a table with a brew and people watch. There’s lots to see in the area. We had to visit the seaside city of Brighton to see where our son, Stephen, worked for a few months when he was a student at the University of Michigan.

We also visited the D Day Museum in Portsmouth. 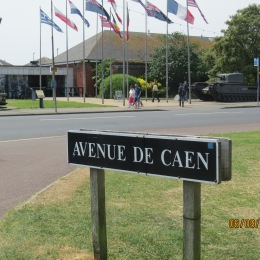 Wherever we travel in Europe the history continues to astound us. Taking a coach is a slow way to travel but it has worked well for us because it has allowed us to see the countryside which is truly lovely. And unlike train travel which we have used as well, the coach stops in the downtown areas so we get to see the small towns. Winchester had been suggested to us as a particularly pretty city off we headed to see for ourselves. We first walked up High Street stopping at many of the booths along the way where locals sell their wares.

We stopped and chatted with  folks sharing information about the Remain Campaign. And bookstores are always a weakness for the two of us. But I wasn’t expecting to find a whole display of books explaining both sides of the Brexit debate. (Too bad the oral arguments weren’t that clear!)

Winchester Castle was our destination at the top of the street.  The Great Hall is all that remains of the castle.  It was originally built in 1067 for William the Conqueror but later replaced in 1222 and 1235 which is what exists today. This is the hall where Sir Walter Raleigh was put on trial. But most significantly, The Round Table, that legendary table of King Arthur and the Knights is housed here, although it has been determined that it was in actuality built much later probably in 1290.  This is the Round Table on which Sir Thomas Malory based Le Morte  d’Arthur.  It is absolutely huge measuring more than 9 feet in diameter and weighing more than 2 tons!  During the reign of Henry VIII the tutor rose was painted in the middle of the table.  The stained glass windows depict the knights of the Round Table and are spectacular!

Winchester Cathedral was our next destination (and we both had the pop song from the 60’s humming through our heads for several days)!  This Cathedral is one of the largest cathedrals in Europe. But my primary reason for wanting to see it was because this is where Jane Austin is buried.  Her funeral, the literature said, was attended by four people and they were told the funeral had to be over by 10 am so as not to interfere with the regularly scheduled service!  She was only 41! We did stay for the Evensong service and it was mind boggling to think that the music of J. S. Bach (1685-1750) that we were listening to was half a millennium newer than the cathedral itself that was built in 1069. 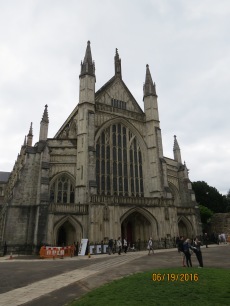 Bath is located on the river Avon. “Ah,” I thought, “like Stratford on Avon” but then it was pointed out to us that there are about 7 rivers in England named Avon and that the word avon actually means river.Visiting Bath put time in perspective. The Roman Baths there date from 50 or 60 AD and a bathing complex was built over the next 300 years. 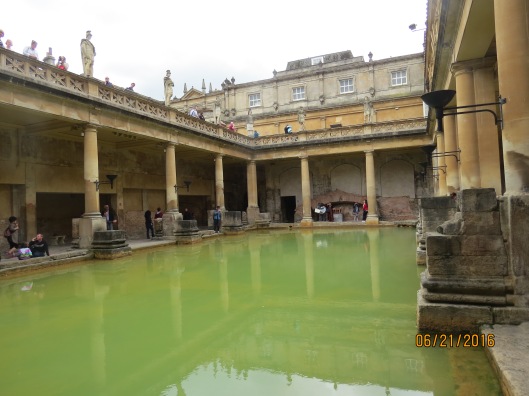 In the museum we saw the Curse Tablets that were scratched in metal and written to Minerva.  These tablets were, as the name suggests, curses people wrote about injustices that had been done to them.  The writer named the name of the person who had committed the wrong, as well as the injustice they had perpetrated.  I found it particularly interesting that if a person didn’t know who had wronged them, or was unsure, they could create a list of suspects!   There is a suggestion that Bath may have been the site where King Arthur (back in about 500 AD) defeated the Anglo-Saxons.  This is something I can not begin to comprehend!  When I think of the Anglo-Saxons I think of Beowulf and English literature…not a location I can actually visit.

Bath is a lovely city and everything speaks to its history.   We ate breakfast at a Sally Lunn’s which dates to the early 1600’s. 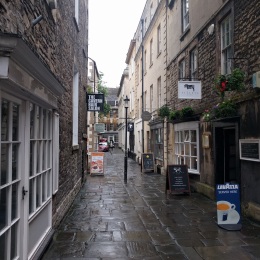 We found a pub where supposedly Charles Dickens wrote, The Pickwick Papers. But in addition to all that it’s just a generally pretty city!

Then there is Stonehenge! Without a car it took some figuring out how to get there. But in the end it wasn’t too complicated.  We got on the bus, took the ferry and then got a train from Portsmouth to Salisbury.

From there we had made reservations on the Stonehenge tour bus to make the last half hour drive.  Because we were visiting in the summer, the website strongly suggested that we get tickets in advance for a specific time to enter. By calculating how long the trip would take us in total we figured noon would be a good entry time. And it turned out to be perfect! We were dropped at the Visitor Center from where we got a shuttle to the actual site. Even with all the pictures I had seen, the first glimpse took my breath away.

It’s definitely one of the world’s greatest antiquities dating from 3000 – 2000 BC. Because of millions of tourists who visit the site each year, the stones are fenced off so you can’t actually touch them. This also protects any archaeological treasures that may still remain beneath the stones. And it’s been done in such a way that it doesn’t limit the visitors view. While its origins are not exactly known, it has been discounted that Stonehenge was a Druid construct, dating much earlier than that. The best scientific thought of today is that it was created as an ancient people’s memorial, part burial site and part worship site. Since we’ve been in England a research document has been published saying that the stones were moved from Wales. The stones were cut and the literature points out that tongue and groove techniques were used in their construction.  The whole idea is difficult to comprehend, but to think that people moved these colossal stones to a distant location is overwhelming.  After leaving Stonehenge we stopped in Salisbury for lunch, (during which time it began to pour!) and then visited the  13th century Chapter House of the Salisbury Cathedral in order to view one of the four remaining copies of the Magna Carta. It was written in Medieval Latin so we’ll just have to take historians’ word about what it says!

Our travel continues to be motivated not by traveling to see interesting sites but traveling to be interested in whatever we see. That being said, this has been a fascinating time to live in England.  We had read a lot about Brexit, the referendum the Prime Minister had proposed to let the citizens decide whether to stay in or leave the European Union (EU). But even though there is a lot wrong with the EU we figured that the economic stability and benefits that it provides would be too great for the majority of UK residents to vote to leave.  But as we listened to debates on television we began to understand how many people were extremely frustrated and how close it appeared the vote was going to be. Even so I think most were shocked to wake up on Friday morning to find that the UK would be leaving the EU.  And most horrifying is that there seems to be no plan for going forward.  Unlike the US where everything seems to operate in slow motion here things happen immediately.  A few short hours after the vote was final, David Cameron, the Prime Minister had stepped down.  Then a few hours after that the First Minister of Scotland, Nicola Sturgeon, gave an amazing and articulate speech expressing her displeasure with the final vote since the Scots had voted to stay in and stating that while she will work to resolve the issue, there is a good chance that Scotland will have another referendum to decide whether Scotland should remain part of the UK.  Nothing happens until the UK officially asks to leave but from this American’s perspective it appears to be a long difficult future ahead for the country!

The second big event going on throughout Europe is the Euro 2016, the futbol championship that only occurs every four years.  England had made it to the final 16 teams and now only had to beat Iceland to move on to the quarter finals against France!  The excitement was contagious.  We tried to get into our neighborhood pub but it was impossible to even find standing room where we could see the television.  So we headed back to our cottage to watch there. As unbelievable as it was, Iceland upset England (just like their surprise tie with Portugal that got them to the final 16)!  For many it was like rubbing salt in a wound! And within hours the English coach had resigned!

For many it has not been a good week for England, but we’ve certainly learned a lot, and enjoyed our visit so far. And now we look forward to next week and London!