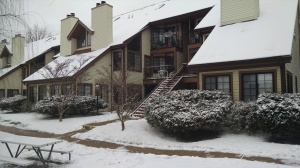 I find I’ve learned a lot so far:

Take winter for instance: While I don’t like winter I have learned I don’t dislike it as much when there’s little snow. We did have two occasions in January when we had to brush the car off, but that’s not the same as driving 40 miles to work in ice, snow and whiteout conditions–always wondering: will I stay on the road or slide off in the ditch and maybe more importantly will that other car see me? And if the weather is good on the way to work, will it be when I trudge home 10 hours from now? I also find that I don’t care what time the sun comes up, since I no longer go to work and come home in the dark! It’s also amazing what a difference it makes when the sun shines nearly every day. In west Michigan it seemed like the sun left in November and didn’t return until March! As good as all this sounds, I do find that a lot of winter is relative. Waiting for the metro or walking outside in 35 degree weather sounds summer-like compared to what Michigan is having, but in fact, I find it’s really pretty cold and find myself wishing for springtime! But I smile when I see how little snowfall here will close down schools and federal offices! (The day the picture above was taken all schools in the area were closed!)

Then there’s the issue of driving a car: We are living about 1.5 miles from the metro and so far haven’t braved that walk, but we do often park at the Metro Parking Garage where they have what for us seems like a creative payment plan. You park your car and when you leave it costs $4.85 no matter if you were there an hour or 12 hours. It makes it so very easy. The DC metro trains are extraordinarily easy to use. They’re efficient, clean and connections between lines are well-marked! It’s about a 40 minute trip to the center of DC and about an hour and three quarters to our son’s family in Rockville, MD. One of the greatest deals we’ve found so far is the senior half fare card! Can’t beat it! Driving here is another story. We do use the car to do our weekly grocery shopping, but for the month of January we used one full tank of gas, quite different from the 1.5 tanks a week I used before retiring. The traffic here is horrendous. Why anyone would drive to work when they can travel stress free on the metro is beyond me. And to boot federal agencies reimburse employees for their metro tickets.

What have I learned about renting a condo? We have been very fortunate to have found a perfect condo for us through Airbnb. It’s small; two bedrooms, a living room (with wood burning fireplace) and kitchen with dining area combination. (It also has a stackable washer and dryer in the unit. Really convenient!) The thing I think we got luckiest with is the bed. It is absolutely wonderful, has a brand new mattress. I can’t imagine what it would be like to sleep on a poor mattress every night! The landlord is especially nice, accessible, and accommodating. I would prefer to be less in the suburbs and closer to the city, but DC is a very pricey city and we couldn’t find anything that met our needs and our budget. We have decided to spend another month here and for that month we were lucky to find a place just on the northwest edge of the city and are excited to give that location a try.

Courtyard at Freer and Sackler Gallery

We’re half tourists half residents. DC is an amazing place. We’ve visited the Spy Museum (Since this time, it’s amazing how many people whom I’ve encountered have become spies in my mind!) toured NPR, the Library of Congress, the Portrait Gallery, the Bureau of Printing and Engraving and the Freer and Sackler Galleries (part of the Smithsonian Museums). We have tickets for the 70th Anniversary of the End of World War II Concert by the US Marine Band (billed as The President’s Band…Imagine your own band!) and have also arranged for a tour of the Pentagon (assuming we pass the security check). We’ve also found our share of pubs and eateries! We even found a place to play weekly trivia nearby.

Now what about glitches? Perhaps our biggest one has been managing our prescription drugs. After we sold our home our new residence became our son and daughter-in-law’s home in Michigan. We changed the address on virtually everything, but for some reason when we ordered our quarterly drugs, the address didn’t get changed on that account and the prescriptions were sent to our old address and weren’t “forwardable.” So we didn’t receive them. After repeated conversations with the drug company, the original drugs were never found, but the company had us contact our doctors to call in a new prescription to a nearby pharmacy and while we had to pay the upfront co-pay the company assured us that we would be reimbursed. Reimbursement hasn’t come through yet, I’ll keep you posted.

Another major issue is the use of credit/debit cards. As I mentioned in the above paragraph, we sent change of addresses to everyone: friends, relatives, credit card companies, banks, investment counselor, doctors, dentists, virtually anyone who ever heard of us has our new address. I paid particular attention to banks and credit card companies indicating that we would be traveling for an extended period of time. Well and good, but the first time we tried to use our debit card at a local grocery it was denied. Talk about embarrassing! When I called the bank, they told me they were just protecting me from fraud. I think they were protecting themselves. But okay, I understand that can happen. Then last week when I was paying my copay on my drugs on my credit card, yep, it happened again! When I reminded the guy from the card company that I had called in advance and told them we’d be traveling throughout the world, he paused for a moment before responding, “Oh yes, I see it noted on your account.” Really? A lot of good it did! I’m really glad we have a few months before we venture abroad as I’m quite certain these sorts of issues are best resolved on this side of the pond!

Solving problems and dealing with the mundane is part of life no matter where we’re living, but for me what I like best is that every day is a blank slate… a day to do whatever we wish, or nothing at all. If the day is pretty and we want to venture out, we do so. If we want to spend the whole day sitting and reading by the fire, we can do that! The greatest times we’ve had as a family have generally been the result of some spontaneous idea. “Hey, do you wanna…?”

I’m not sure what’s next, but all in all I think we’re off to a good start!