We left Alverstoke Village early Sunday morning.  Because we had our luggage we chose to call a taxi to take us to the ferry instead of doing the half mile walk followed by a bus ride. We arrived at the dock just in time to catch the ferry across the harbour to Portsmouth where we had more than an hour wait for our National Express Bus.  (Because I am paranoid about missing a connection, I inevitably allow way too much time when we need to catch a train or bus! Bob is patient and although he may roll his eyes occasionally he never complains!)  And we truly felt like locals when while waiting for our coach we met a friend we had recently made in Gosport! Interestingly along the way, the young woman (maybe early 20’s??) sitting in front of us began humming softly. Then it dawned on us, she was humming The Star Spangled Banner.  She and her friend were either speaking German or a Scandinavian language but it definitely wasn’t English. I don’t think I’ve ever been anywhere where someone just spontaneously started humming or singing the national anthem.

We arrived at Victoria Station two hours after we left Portsmouth and grabbed a taxi to our Airbnb in Belsize Park.  Our choices of places to stay vary according to location.  For instance, when we are staying in a large city for a shorter period of time and where prices tend to be horrendous, we know a smaller residence will be just fine. We also know that proximity to bus lines and a lively neighborhood are important because during short stays we tend to do a lot more sightseeing and eat out more than we would usually. Belsize Park is an upscale neighborhood with lots of restaurants, shops, and a grocery. 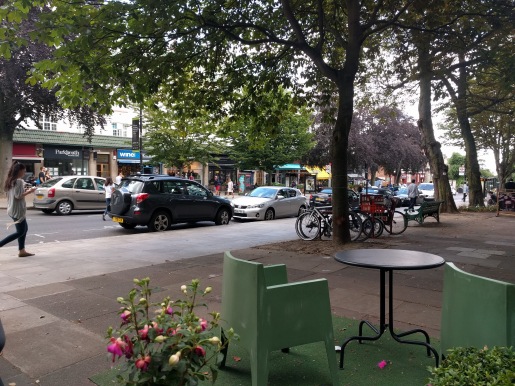 Plus it was just steps from the busline to the center of London.  While buses are significantly slower than the underground we like using them as we get  a better feel for where we are in the city and also see things along the way.  Our London stay would be just 5 nights and so our one room apartment with small kitchen with the prerequisite stove, refrig and sink, newly redone bath,  and a very large, much more comfortable than usual, pull out sofa was perfect. And we paid significantly less than we would have for a hotel.

We had made a list of things we wanted to see and do while in London. Our first challenge was to get downtown.  We confidently hopped on the bus only to learn that they don’t take cash so we got back off and located the neighborhood quick stop where we could buy daily tickets.  (It’s not possible to buy more than one daily ticket at a time and the weekly pass would be more expensive so each morning we just stopped and purchased our daily bus ticket.)

As history buffs one of the sights we both wanted to see was The Churchill War Rooms.There was quite a line to get in but the couple behind us was from New Jersey and conversing with them made the time quickly pass. The Churchill War Rooms are just as they were left the day the war ended.   These rooms were in the basement of The New Public Office Building and first used a week before Britain declared war on Germany in 1939. They were used 24 hours a day and the lights in the Map Room were never turned off until August 1945. There were bedrooms for many of the leaders (including one for Mrs. Churchill). Small pins marked key locations of troops on wall map in the Map Room. There was a private room with a phone to the President Roosevelt.   What an ordeal it must have been to live in such cramped small spaces with no windows and no fresh air. 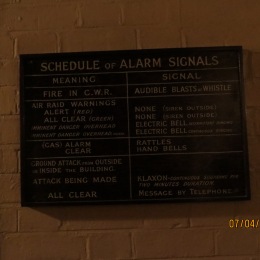 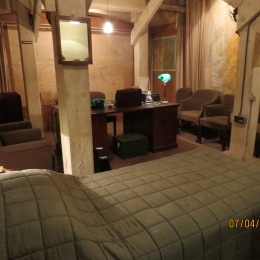 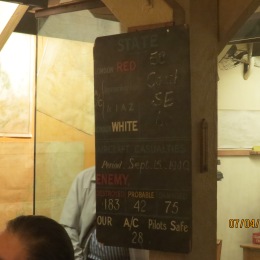 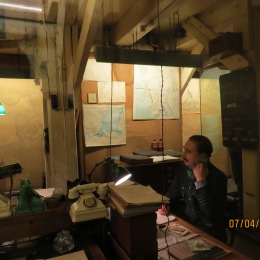 Another historical place we wanted to visit was The British Library. There’s no charge for admission and it has to be one of London’s best keep secrets because there was no line to get in!  The library itself is beautiful.  And while there were many exhibitions going on it was the Treasures Room we had come to see. In the Treasures Room they have one of the original Gutenberg Bibles from 1455. There are also two of the four remaining copies of the Magna Carta. (If you’ve followed my blog you’ll remember we saw another of the original Magna Cartas in Salisbury when we traveled to Stonehenge.) On display was also Leonardo da Vinci’s notebook as well as original texts of William Shakespeare, Charles Dickens and Jane Austin. There was Handel’s handwritten manuscript of The Messiah and also handwritten lyrics by the Beatles. (“A Hard Day’s Night” was written by John Lennon on the back of a birthday card to his son, Julian.  And the card is on display!) So many treasures in one place!  Not surprisingly pictures were not allowed.  But the pictures will remain in our minds forever! 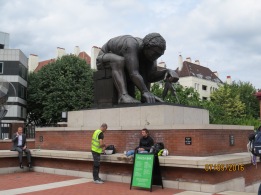 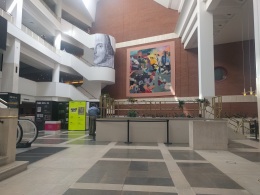 One of the items on the top of our list was play tickets. Lots of choices so we were undecided what we should do.  We definitely thought we wanted to see a musical.  Les Mis? Kinky Boots? 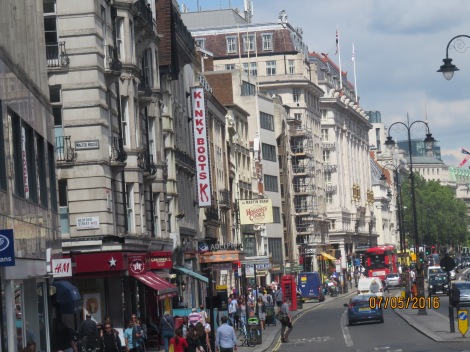 I asked the clerk for his suggestion, and without missing a beat he said, “KInky Boots.”  He said it was by far his favorite and the one to see. So we got tickets for the Wednesday matinee.  Kinky Boots far exceeded our expectations.  When I read the plot before the play began, I remember thinking, “Really?  A play about a shoe factory?”  But it was by far one of the funniest, most wonderful productions either of us has ever seen.  The music was out of this world! And the message…powerful!

When we’ve visited other large cities we’ve often bought tickets for the Hop On Hop Off Bus.  We did this here as well. (We actually purchased them online before we arrived in London in order to save a few pounds.) It allows us to see a lot of sights that we wouldn’t make special trips to and also gives us lots of interesting historical tidbits. (For instance, Regent Street is owned by The Crown Estate. And you can tell that it is owned by the crown by looking at the finials atop the lamp posts in the area.  Another tidbit: Queen Victoria disliked an arch that was to be the entrance to Buckingham Palace so she had her carriage built so it was too wide to pass through it.  The Marble Arch was moved to Hyde Park where she didn’t have to look at it!) 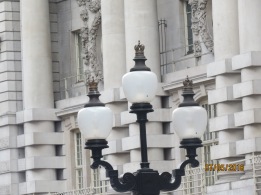 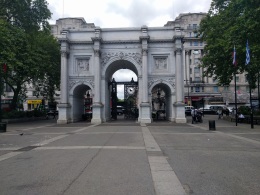 The Marble Arch in Hyde Park

This Hop On Hop Off came with a free boat trip on the Thames.  The weather we had in London was superb!  It was warm and sunny and perfect weather to take the cruise. We got on at the dock by the Tower Bridge and got off at Westminster Bridge.  The guide pointed out a row of bronze lions that are attached to the walls beside the Thames. Legend has it: “When the lions drink London will sink;  when it’s up to their manes we’ll go down the drains.”  No worries on the day we were there! 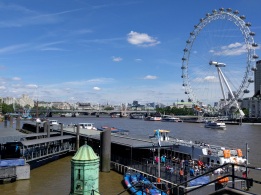 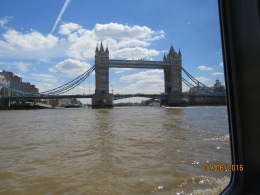 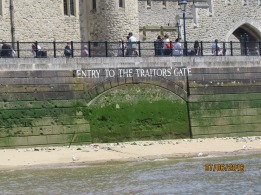 Traitors’ entry to Tower of London 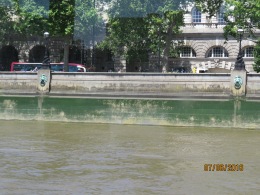 Lions on side walls of Thames

After the Great Fire of London Christopher Wren was charged with rebuilding much of the city in the late 1600s. Among his greatest achievements was St. Paul’s Cathedral, at least the fourth church to have been built on this site. (There’s that extraordinary European history again!) Because of that, we wanted to see it. 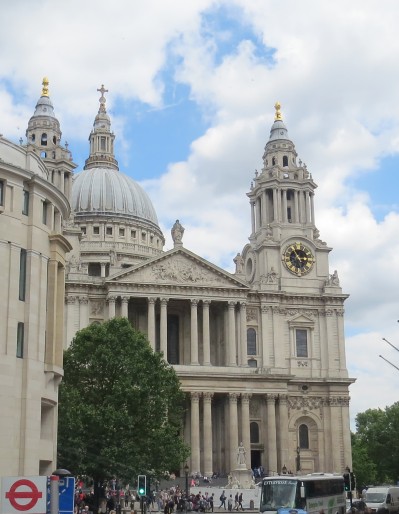 It is lovely, but I have to admit that all cathedrals are beginning to look a bit alike by now. And the admission charges are pretty steep.  Concessions (the European term for discounts for students, seniors and sometimes unemployed…yep, the unemployed often get discounts for cultural events. How cool is that?) But anyway the Concessions price was 14 pounds.  That’s the equivalent of about $21 a person! The pound has decreased in favor of the dollar after the recent Brexit, but it’s sill  pretty pricey. (But as Bob has pointed out the upkeep must be really expensive as well.)

Like every other European city we’ve visited we had to go to at least one market.  Each day on our way into and out of London our city bus passed through Camden Market.  We decided on our last day it was a must see for us.  Again it was a warm day and the market was crowded. Beer is a favorite beverage of mine (as you may have already concluded from previous postings) but I was particularly surprised as I perused the beer menu on the wall to see Founders listed.  We may be a long way from Grand Rapids but their local beer had already found its way here! 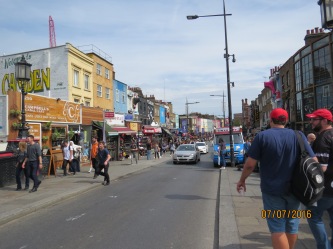 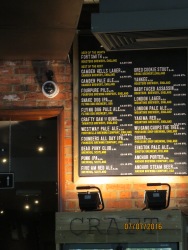 One last place we had to visit before leaving London was Abbey Road.  I think the cover of that Beatles Album is permanently etched in the minds of all who were teenagers in the late 1960s.  In 2010 the crossing was given Grade II status for its cultural and historical importance. They have to repaint the crosswalk every three months because all the people crossing (us included) wear the paint away. It’s not possible to visit the Abbey Studios but there’s a nifty gift shop near the crossing that has a lot of Beatles (and Pink Floyd) memorabilia. 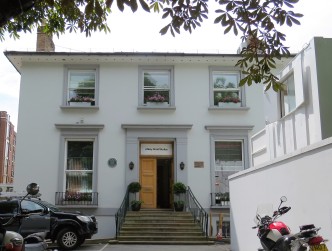 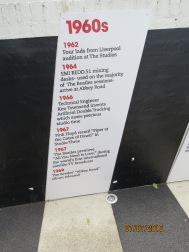 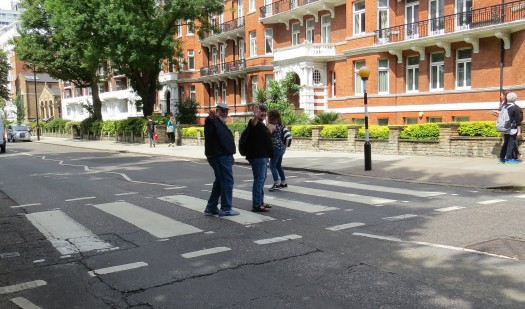 People told us Brits, particularly Londoners, would be a lot less friendly. That’s certainly not what we’ve found in our stay in this wonderful city! It’s been a hectic few days in London but we’ve seen a lot and we’re ready to move on. Time to pack up bags and travel across land and sea tomorrow as we head for Dublin.