For Bob and me summer is synonymous with water.  Last winter we had coordinated all our family schedules and managed to find a week in July when everyone was available.  After lots and lots of searching I finally found a place that was located right on the shore of Lake Michigan, just south of Grand Haven, that would accomodate all 14 of us! 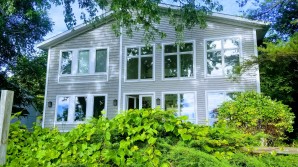 And what a great place it was.  It had an open floor plan so folks could be in the living room, dining room or kitchen and yet all be together.  The whole front of the house was windows.  The house sits atop a dune so there were about 50 steps down to the beach. But just a few steps down there was a great deck with chairs so those of us who didn’t want to make the trek down could still enjoy the view. 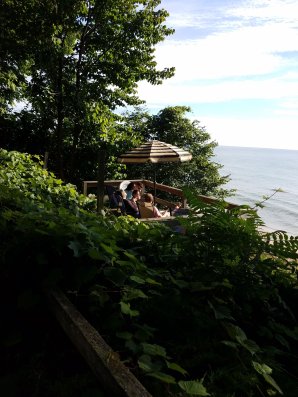 Our family ranges in age from 2 to 72 but it doesn’t matter at the lake. There’s always something for everyone.  We played miniature golf, rode go-karts, explored the streets of the tourist town, visited local wineries, swam at the gorgeous Lake Michigan beach, and in the evenings after watching sunsets, there were s’mores over campfires and games to play. What a fabulous week we had!

Bob’s 55th class reunion was in August in nearby Michigan City so we decided to spend the month there.  Again right on the shore of Lake Michigan.  Sometimes I think you have to move away from your hometown to fully appreciate it.  At least that’s what we found. We had opportunities to attend musical events including the Michigan City Chamber Music Festival, now in it’s 16th year, and featuring free musical performances. We also enjoyed “The 25th Annual Putnam County Spelling Bee” presented by the Dunes Summer Theatre. We took in an Andy Warhol Exhibit at the Lubeznik Center for the Arts. We visited the Old Michigan City Lighthouse and Museum. 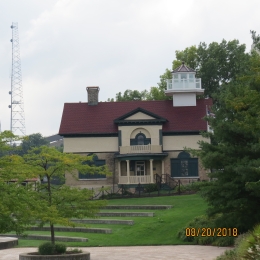 The “new” lighthouse was constructed in 1904 and is the iconic image of the city. It was electrified in 1933 and we’ve watched many sunsets from the pier that extends out to the lighthouse.  The Old Lighthouse, and now museum, was constructed in 1858.  We found it interesting that the light had a woman keeper from 1861-1904.  It is believed that she served longer than any other keeper in the country and most impressive is that her light never went out. http://www.oldlighthousemuseum.org/colfax_hartwell.html

And while The International Friendship Gardens has been an institution in Michigan City since 1930’s when it was modeled after gardens at the World’s Fair in Chicago neither Bob nor I had ever been there.. The original park consisted of 14 ethnic gardens.  Queen Wilhelmina donated 200,000 tulips. The King of England sent plants as well as a gardener to create an English garden.  The King of Persia sent roses for the original rose garden.  There was even a theatre for concerts and plays located on an island created in the creek in the park with seating for the audience on a nearby hillside.  In the 1960’s the Gardens suffered from neglect, but in the past five years a dedicated group of volunteers is working hard to restore it to its previous grandeur.  It’s a very peaceful place. We encountered kayakers on the creek that meanders through the garden. We followed the Path of Nations which took us by the Irish Garden, the African Garden, Romanian Garden as well as the Polish, Scottish, Lithuanian, German, Italian and Norwegian Gardens. And of course, the original Persian Rose Garden. A great way to spend an afternoon. 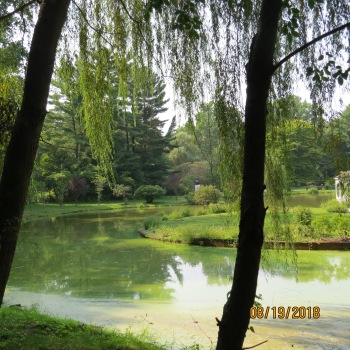 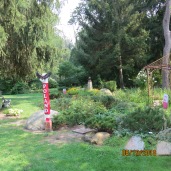 One of the highlights of our trip was the Washington Park Zoo. The zoo was founded in 1928 and is built on a large dune near the lake.  For our 50th wedding anniversary a year ago our kids had given us a bench honoring our years together.  We were amazed when we entered the zoo and as we approached the tiger exhibit, lo and behold there it was. How cool!  We asked a passerby if she’d take our picture.  “Oh wow!” she exclaimed, “You’re the people in the picture on the bench!”  What a cool gift! 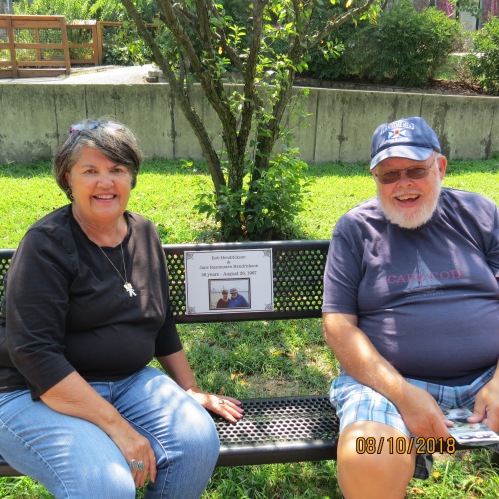 We had allowed a few days travel time between leaving Michigan City and arriving at our next destination: Hull, Massachusetts, located on the southern shore just south of Boston.  Besides catching up with friends along the way there were some sights we wanted to see. We tried to avoid the interstate system much of the time so we could see more of the small towns. We initially thought we’d take Highway 20 (the longest highway in the US) from Michigan City to Boston. But traveling through eastern Indiana and northwest Ohio made us realize perhaps we needed to be more selective. We found it interesting to travel along the Erie Canal across much of New York. 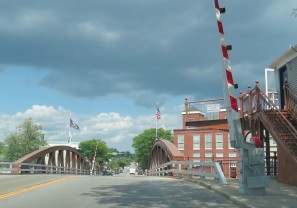 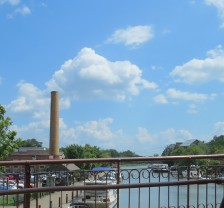 One of our stops was Rochester, New York, where our daughter-in-law, Sadie, suggested we visit the Mount Hope Cemetery.  We found it very helpful that the cemetery had an office where I picked up a map.  We visited Susan B. Anthony’s grave as well as Frederick Douglass’.  Interestingly, Bausch and Lomb are buried there.  I found it odd they were buried on the same site.  As German immigrants they had begun producing monocles in 1853.  They eventually went on to lenses, binoculars and camera lenses which makes us wonder if there isn’t a connection between Eastman Kodak and Bausch and Lomb.  In any event their grave site is really lovely, located under the branches of a huge tree as though protecting their eyes from the dangerous rays of the sun.

In LeRoy, New York, just outside Rochester we visited the Jello Museum.

Here we learned how Peter Cooper,  the inventor of Jello, got a patent for it in 1845, but could never get it to catch on with the American public so he sold the patent to a fellow townsman for $450.  We saw Jello molds, learned about the most popular flavors.  On display were lots of Jello posters (All presence of Bill Cosby has been removed.) and saw recipe after recipe for salads and desserts made with Jello.  It took us back to the 1950s and 1960s when it seemed like every home served Jello regularly.

We really enjoyed the pastoral views across New York state and Massachusetts.  The area around the finger lakes is particularly nice. Our first stop in Seneca Falls was at the Women’s Rights National Historical Park. Central New York was the home to many Quakers so it was a natural location for the birth of women’s rights given that most Quakers favored gender equality…well, a bit more than others at the time. My favorite tidbit: When Elizabeth Cady  married Henry Stanton in 1840, the vows omitted the word, “obey.” How cool too that she is known more than 175 years later by her given, maiden and married name! I particlarly liked the statue depicting Amelia Bloomer introducing Susan B. Anthony and Elizabeth Cady Stanton in 1851. 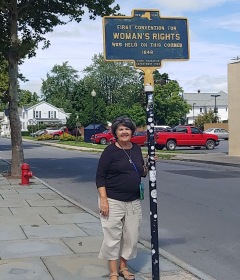 We learn so much in our travels.  I had no idea until we visited the Women’s Rights National Historic Park that there was a 19th Amendment Victory Flag. The purple represents justice, and loyalty. The white, purity of intent of the movement and the gold is the color of the torch that guides the women. Whenever a state radified the amendment a star was added to the flag. 36 were needed.

The National Women’s Hall of Fame is very much alive.  While we read the biographical sketches of each individual we understood that this is an evolution.  The present and the future are building on the shoulders of those women who have gone before.  I was also struck by the number of women who were connected to important men.

Before moving on we drove past Harriet Tubman’s home. I think we often forget what her freedom cost her.  She indeed was free but her family was all in Maryland and she was forever separated from them. It’s difficult to comprehend that she died just 34 years before I was born. 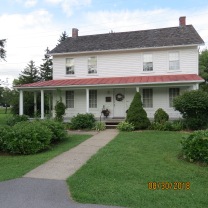 We continue to be entertained by signs and bumper stickers we see along the way…some amusing; some a bit deeper!

We continued our drive east stopping the next day in Sturbridge, Massachusetts, at Norman Rockwell’s Museum.  What a great surprise to learn we were there on “Free Fridays.”  My very favorite works of his are the Four Freedoms that he completed during WWII. Freedom from Want, Freedom of Speech, Freedom of Worship and Freedom from Fear.  It seems unbelievable that he completed all four in just seven months.  Having spent the past 10 months traveling across the country from DC to California and back again, Rockwell’s illustrations of everyday American life struck a special chord with us.  It was like a synthesis of all we’ve seen and experienced.  After leaving the museum we had to drive down mainstreet Sturbridge to compare his painting with the actual Main Street.

Just a few hours away from our destination, we decided to stop in Springfield at the Dr. Seuss National Memorial Sculpture Garden.  When Dr. Seuss (Ted Geisel) died in 1991 his widow authorized the creation of the memorial that Geisel had envisioned.  His stepdaughter, Lark Grey Diamond-Cates, a noted sculpturer, created more than 30 statues.  It’s such a joyful experience walking among the characters. 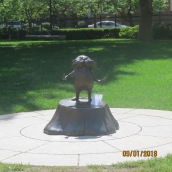 About 3 pm we pulled into our driveway.  We’re staying in the same Airbnb we stayed in when we were last in the Boston area.  We’re out on a peninsula, a two block walk one way from the ocean and a long block the other direction. We look forward to exploring lesser known sights in the area this time.  It feels good walking into a known place remembering the little things:  the couch that sinks a bit, the floors that aren’t quite level.  Ahhh…it feels good to be home!
Loading Comments...