As I get older, I realize my perspective of winter has changed dramatically. We spent most of the years when our kids were growing up in areas where we got a lot of snow:  Wisconsin, Illinois, upstate New York and Michigan. I remember with great fondness when our oldest son used to make forts out of snow and then be entertained for entire afternoons with his friends. Or when our daughter used to love to go down to the frozen soccer fields and ice skate for hours on end.  Or when our youngest son used to drag his bright orange net down to those same frozen fields for a pick up game of hockey. I never thought a thing about driving two hours every weekend to get to one of our kids’ hockey games regardless of the weather. I remember visiting our son, Stephen and his girlfriend in DC for Thanksgiving and enjoying the walk to a great Italian restaurant as large snowflakes fell.  Well, those days are gone! I now go out of my way to ensure that we spend the winter months in locations where we’re not apt to experience winter-like weather. We really don’t have the wardrobe for winter nor do we have space in our limited luggage to make room for it if we did.

So it seemed natural that we spent this past November and most of December in Florida.  We returned to the same Airbnb on the west coast where we’ve been a couple of times before. We had had a pretty hectic travel schedule for most of the year so we were looking forward to  some down time. Bob and Art, the guys we rent from, are like old friends.

They take good care of us always checking in to see if we need anything, installing a new pool cover to make sure it stays nice and warm. They even invited us to have Thanksgiving dinner with them.

Talk about gracious hosts! Most of the  time we were in Florida the weather was amazing, warm temps with little rain. But it did turn cold a couple of times. And we had to smile as people dug out their winter hats, coats and gloves when the temperature fell to the low 50s.

We found several interesting things to do when my friend Rita came down to escape the Pittsburgh cold. We love gardens so we decided to check the Marie Selby Botanical Gardens, just a short trip up to Sarasota.  I’m not sure how we’ve missed this on previous visits. 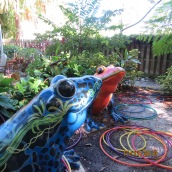 Arcadia is a fun small town only half an hour away.  Both sides of the main street are lined with antique shops and because it wasn’t quite the busy season yet, we had most of the town to ourselves.  I was amazed when I inquired about something in particular, in this case a pitcher from Fiesta Ware, that after the owner told me she didn’t have it, continued to direct me to another shop that she thought might.  Bob and I stopped to have lunch http://marymargaretsteaandbiscuit.com  The staff were dressed as they would have been a hundred years ago.  And the food was fantastic! What a great afternoon! 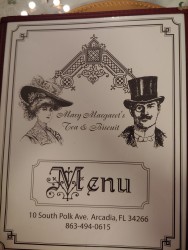 I’m a pretty early riser and my morning routine consists of taking my morning coffee and a book or a Sudoku puzzle out to the lanai.  On one particular morning I was amazed by the flock of green birds that came to feed at the feeders in the house behind ours. I’d never seen anything like them. 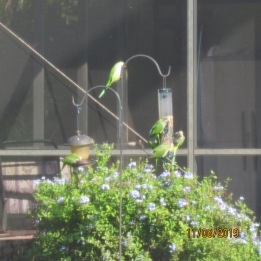 It turns out they were a variety of parakeets.  At least that’s what an article in the local newspaper said.  And they are considered invasive. Invasive or not I really felt lucky to be able to see them.  And they were kind enough to stay around while I grabbed my camera. Only on this one morning, they never returned.  But birds are one of my favorite parts of Florida.  We see so many interesting ones.

One afternoon we drove up to Farlows on the Water ( https://www.farlowsonthewater.com/)  and met my cousin and her husband for lunch. They’ve just moved to a place in Florida where they’ll spend their winters.  They too are avid travelers so it was fun to compare experiences. Her husband has done a lot of research regarding our family history in Denmark and I’m excited to go back to Denmark and follow up on it. And in addition, we had an amazing seafood lunch!

We also ventured to the Edison and Ford Estates in Fort Myers.  And it was just as lovely as I remembered it years ago when we visited with our kids.  I can’t imagine what life must have been like to live in Florida back in the 20s without all the conveniences of today.  And in particular without air conditioning. The estate was just getting decked out for Christmas which made it extra nice.

Online I read the American Sandsculpting Contest was taking place just about an hour away! What an event!  Each sculpture was more impressive than the last. Then just before we left, we came upon a refreshment tent and I’m always ready for a beer.  We had a seat and listened as a guy explained the process of building sand castles. He told us how the sand in the area was particularly good for sculpting and then he went on to demonstrate using buckets and hoses and calling upon folks in the audience to come up and help him construct a tower.  It was really fun and informative!

There’s something about spending Christmas Day watching little ones open gifts that we really wanted to see.  So we decided we would drive up to the DC area to spend Christmas with our second son’s family including our 3 youngest grandchildren all under the age of 10.  We figured we could do it in 2 days of driving. But there was a catch. I had made reservations for a house on Fort Myers Beach for the week of New Years.  So it meant driving to DC, then 5 days later driving back to Fort Myers Beach and then a week later driving back to DC. Oh well, we had the time; we only had to get the weather to cooperate!  And thankfully it did!

Christmas with the kids was definitely worth the drive. It more than surpassed my expectations.  My daughter in law and I went with the two girls, ages 9 and 7, to hear Handel’s Messiah performed by the National Philharmonic at nearby Swarthmore.  The kids made and decorated Christmas cookies. 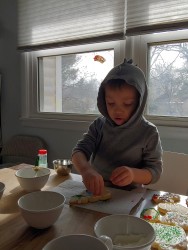 Cary flew in from Rome and Patrick came out from the city. Bob’s and my gift to the family was tickets for the Choral Arts Family Christmas at the Kennedy Center on Christmas Eve morning.

I wasn’t sure how engaged our four year old grandson would be but I needn’t have worried! He was captivated the whole time!

Afterwards we all went out for lunch! How wonderful it was for most of our family to be together. And Christmas Day was just as special as we had hoped!  Presents, games, great food, lots of laughter! The day after Christmas Patrick, Cary, Bob and I headed for Ft Myers Beach. And the others headed to New York to visit with their other side of the family.

We took three days to drive down stopping along the way to see some sights including the slave auction house in Fayetteville, NC. Next we stopped in Columbia, South Carolina (where you may remember in a previous blog I wrote about the bullet holes from Sherman’s cannons that are still  evident in the capitol building there).

We also stopped for a night in Savannah, Georgia, where we spent the evening listening to dueling pianos. It was a great road trip.

The weather in Fort Myers did not disappoint.  Most afternoons were spent by the pool we had at the house.  Because we’ve been to Florida many times, it was nice to have a week of rest and relaxation and not feel compelled to see all the sights! We found great beachside restaurants,  took walks along the Fort Myers Beach, made a trip to the beaches of Sanibel and managed to get in a round of mini-golf!

We even found a Hoosier bar so we could watch IU play Tennessee in their bowl game! 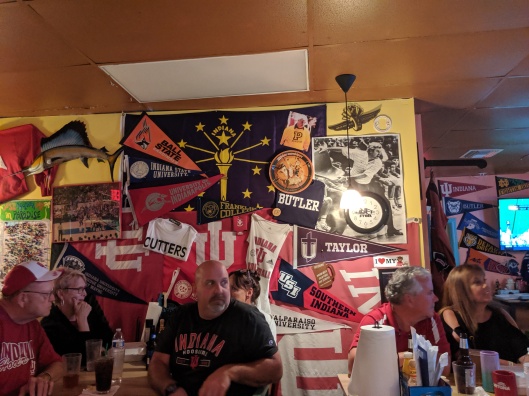 For New Years Eve we found a great restaurant online that mentioned music and quickly made reservations!   About 10 pm following a leisurely dinner we inquired of our waitress what time the music started. We were shocked when she said they were just getting ready to close. This was New Years, what was she talking about? We also knew that the bridge going onto the island where we were staying was going to close for two hours at a certain point.  So we quickly called an Uber and went back to Ft Myers Beach. We wandered around the downtown and then found a bar, surprisingly not crowded, with lots of outside seating. We ordered drinks, got out our ubiquitous playing cards and began our euchre game. At midnight the fireworks began and we had front row seats. Such a lucky break! And when it was all over, we were walking distance back to our house. 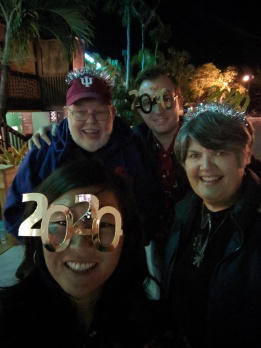 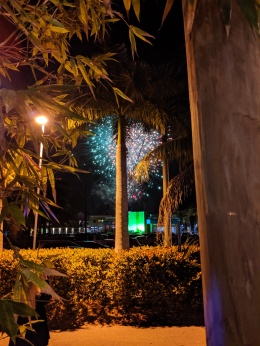 On Sunday we put Cary and Patrick on a plane to head back to DC and Bob and I checked into a motel. 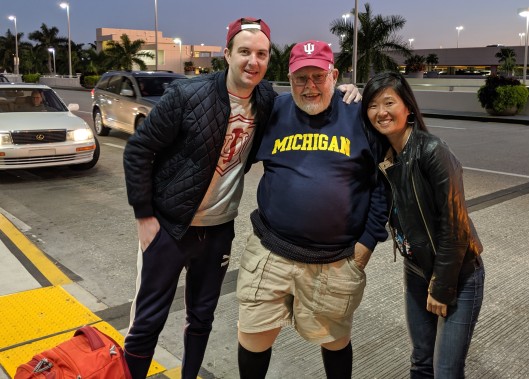 Then the following morning we started the drive back. This was now the fourth time on these roads. It’s fair to say we knew them pretty well.

While we try to avoid winter, it’s not always possible.  It had been seven months since we’ve been to Seattle and I really needed to check in and see how my sister was progressing since she had moved into a memory care unit there.  Seattleites don’t do well with snow. They don’t get a lot of it and when they do it’s usually short-lived. But for the time it’s there maneuvering the hills among drivers who generally aren’t used to snowy conditions can be a real challenge.  We were lucky that for the two weeks we were there the temps hung around 50 degrees, although it did rain EVERY day! And the scenery is spectacular!  We had several nice visits with my sister, got a lot of things done around the house, and then we were off again.

Six days ago we landed in Hawaii!  Last fall I found a two bedroom condo on the west side of Oahu and rented it for the entire month of February!  I feel like we’ve landed in paradise! The condo is perfect and the temperatures divine! We’ve now been to all 50 states and many we have visited more times than we can count.  This may be my favorite of all of them! 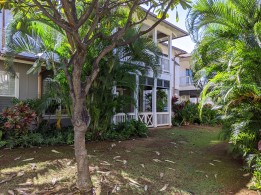 We’ve also traveled to 36 countries and a variety of territories and have plans to add five more countries in 2020.  But in the meantime we have lots to see and explore here. Can’t wait!