While we love our travels abroad, it always feels good to come back to the US for a break.  This time we’re spending a month in DC catching up with family there. Besides taking in the historical sights of the city, we enjoy the zoo, movies and local farm festivals with our kids and grandkids.

Ever since I made the reservations a couple of months ago I had been dreading the ten hour flight from Rome to DC.  It was not nearly as grueling as I was expecting. And it came with the added advantage of knowing when we got to our destination we didn’t have to get on a connecting flight which is always a hassle!  Bob and I had splurged and as an anniversary gift to ourselves, we had upgraded our seats on United to Premium Economy. And boy was it worth it. Don’t get me wrong this was not nearly as luxurious as first class but then it came with a much lower price! I understand that every airline does their premium economy a bit differently. But for us it meant we had seats in the bulkhead…two seats where there are normally three (not nearly as large as first class) but we didn’t have to crawl over anyone and we had the luxury of extra room which allowed us to stand up and stretch. We’ll definitely consider it again for transatlantic flights.

Upon arriving in DC we called for an Uber to take us to our Airbnb in Columbia Heights. Since we had arrived during rush hour on a Friday it was pleasant to sit back and let someone else worry about the traffic. As usual Uber was a great experience.  Our driver even carried our bags up the few steps to our apartment entrance.  What a gentleman!

DC is one of my favorite cities in the world. Once again we had rented a place in Columbia Heights, not far from our January location. We particularly like this area because it’s close to our family making it easy to see them without having to drive across the city which as anyone who knows DC understands is never a pleasant undertaking. However, after spending just a couple of days in Rome, we do have a different perspective of DC traffic.  It may be slow but compared to the weaving in and out and often missing traffic signals as well as the constant onslaught of scooters in Rome, we found DC to be a piece of cake. And we have a new appreciation of our daughter’s driving skills as she safely maneuvered us throughout Rome!

We also enjoy the DC neighborhoods with their multi-colored houses, how we can walk to restaurants, the grocery and the easy (not to mention cheap for senior citizens) bus system. 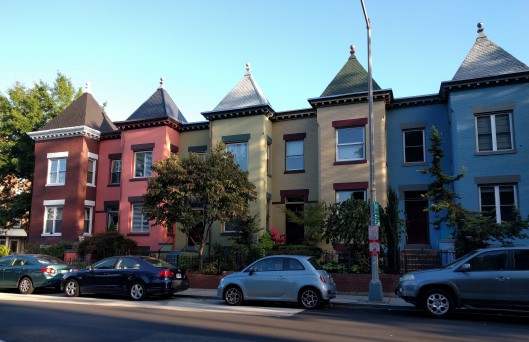 The mild climate DC as compared to Michigan is an added plus. (But then again we’ve never spent a summer there so perhaps that’s an equal trade off for a Michigan winter.) We returned to our favorite trivia bar and were so pleased when they remembered us! And our team finished first resulting in a $20 prize!

Our youngest son had thoughtfully signed us up for timed-tickets to the new National Museum of African American History and Culture on the Tuesday after it had opened the previous Saturday. The experience was beyond words.  The building is spectacularly beautiful inside and out. It’s like walking through history.

We spent more than three hours there and didn’t begin to see it all. I had no idea that Denmark-Norway was dealing in slave trade in the 1600’s or that at the same time the Netherlands was shipping slaves from the Gold Coast of Africa to the northeast coast of South America. There was so much to take in. One man was constantly taking pictures; he explained to us that when he got home he’d be able to read it and process all that he was seeing. 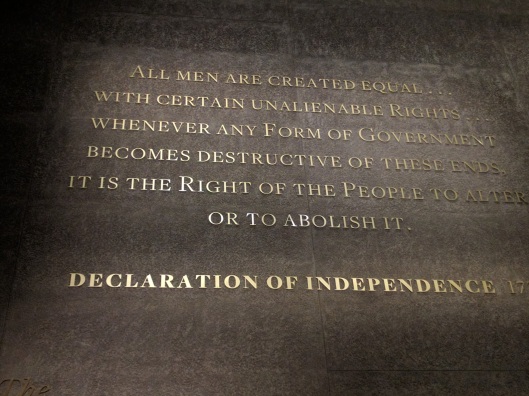 As I was stood absorbed in a newscast from the 1960’s a woman about my age came up to me with tears in her eyes and said, “It seems like yesterday, doesn’t it?  And I think we’re headed back there.” And yet despite the struggle, there was something very uplifting about the experience. I think it defines in large part what it means to be an American.

We still had a few places on our “DC List” that we hadn’t done yet. Among them was the Congressional Cemetery which is located at 1801 E Street SE.

Although this is the first national cemetery, over time it had not been kept up until in the 1990’s when a group of volunteers took it on.  It is in this cemetery that John Philip Sousa (along with much of his family) is buried.

And every November 6 the Marine Corps Band, also known as the President’s Band, marches to his grave and plays.  (Just as we take something off our bucket list, another gets added!) Among other famous people buried here are: John Quincy Adams, Elbridge Gerry, who although a signer of the Declaration of Independence refused to sign the Constitution because it lacked a Bill of Rights and who later served as fifth vice president of the United States. He was perhaps best known for the concept of gerrymandering. Some of the more infamous include: J Edgar Hoover and Mary Ann Hall. Ms Hall ran a luxurious brothel about four blocks from the White House (at 349 Maryland Ave SW) in the middle 1800’s serving many of DC’s rich and powerful. I found it interesting that her gravesite has a guardian angel protecting it.

It’s also a popular place for folks to walk their dogs. A group called the K9 Corps was started in the 1990’s.  They taxed themselves to help pay for the mowing of the cemetery. In order to walk your dog in the cemetery you must belong to this group. The first burial was in 1807. But it’s still possible to be buried in the cemetery. Think about it: it’s possible to be buried on a site that L’Enfant had included in his city plan!

The cemetery is free and in addition to having paper maps, they also have a nifty app that allows you to locate a burial site and then guides the user from her present location to the gravesite!  The whole place is just amazing!  And so few know about its existence!

Tonight we would see a joint production by Second City and Slate. Taking an Uber to the Kennedy Center turned out to be a great decision. When we arrived there was a table outside the Eisenhower Theatre that was selling wine and beer. I asked if it were possible to take my drink into the performance and was a little taken aback when the woman replied, “Yes, in a sippy cup.” That turned out to be a plastic souvenir cup with a lid and while I had never had pinot grigio in a sippy cup. It was pretty good! The performance, just as expected, was hysterical! After the show we headed to The Hamilton for a late dinner. Having never been there before we didn’t know what to expect but the reviews sounded great! How thrilled we were that all their sushi was half price. I guess at 11 at night they don’t want it left over! At 2 am we once again called Uber for our ride home.  How funny that the driver had a sweet little dog in his lap!

We regularly encounter little hiccups as we travel. And this stop was no different.  We had left our car with our family in Rockville six months previous. This is a 2006 Chrysler minivan with 256,000 miles on it. And while it was currently running fine we also knew that at any time it could stop. So we decided it was time to bite the bullet and buy a new car. We also decided that we’d like to donate the minivan to the public radio station at American University. Bob contacted them and they said they’d love to have it.  The university contracts out to a company to pick up the car.  The arrangements were to have the car picked up, and they would contact us an hour prior so we could meet them at the car. When I got up at 7 am, there was already a message that we had missed their call. When I called back they said unfortunately the day’s schedule had already been set and they couldn’t add our vehicle to the schedule. They said they’d pick it up the ,following day but we didn’t need to be there. The next day came and went with the car still at the house. So on the third day Bob called and was told they needed to schedule a time for us to be there. No, he explained everything was under the mat of the car and we had been told we didn’t need to be there. The next day I got a text from my daughter-in-law. She had been home from work and when they came to pick up the car, there was a knock at the door and the man from the company said that while the title and keys were there, there was a lien on the car and they couldn’t take it. Really?  A lien on the car?  I’m pretty sure I must have had a release for the lien but in the sorting and pitching of the papers in our move, I must have thrown it out.  We finally got the telephone number of the company where we’d had the lien and they said they’d fax us a release.  It would cost us $60 but they’d expedite it and we would get it on 48 hours. We drove out to Rockville, the release was indeed in the door. We put it with the other materials and contacted both the radio station and the folks doing the pick up that everything was in place.  For the next week, my son or daughter-in-law would text us daily that they were home from work but that the car was still there. It had now been three weeks since we initiated the donation process and so once again we called the radio station to express our frustration. My husband by this point was saying he truly wished someone would just steal the car. There were keys, the title, the release of the lien and the car was unlocked. Just please someone walk off with the car! I asked the guy with the company to please let me know where the car would be taken after it was picked up.  He gave me the address and then told me to wait a minute while he got their hours. “Oh no,” I explained, “You don’t understand. I don’t care if they’re open or not. I intend to just leave it there if it’s not picked up as you promise it will be next Tuesday.”  Lo and behold at the end of the day on Tuesday, my daughter-in-law texted me to say, “It’s gone!” So beware the next time you see a billboard proclaiming, “Donate your car!  It’s the easiest thing you’ll ever do!” Obviously, that wasn’t our experience.

Next we’ll head to Michigan to spend time with that part of the family and good friends. And we’ll also check in for a couple of weeks with my sister in Seattle.  We feel fortunate to have family living in such interesting parts of the country.