I don’t know what we expected but the Canary Islands were unlike any place we ever experienced! When we first landed in Lanzarote, the landscape reminded us of Iceland, barren with pockets of small communities sprinkled among the volcanic rock. 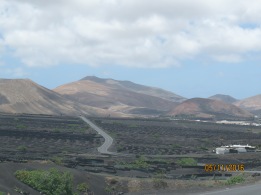 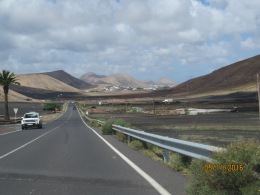 Beautiful in a very Spartan way! It is obviously much warmer in the Canaries and for the month we spent there we never saw more than a light mist and that occurred only twice. (I did read that the record rainfall in May is less than half an inch. And July has never recorded any at all.)

Lanzarote is the island in the Canaries farthest east, located about 75 miles off the coast of Africa and technically part of the African continent. But the Canaries are part of Spain and while Spanish is the native language of the locals, most people speak English because it is a major vacation destination of the residents of the UK.

We had arranged to rent a car but had planned to pick it up the day after we arrived because we thought after a long day of travel we would take a taxi to our abode and not try to figure out the directions to the house. (The airport is only about a 10 minute drive from the apartment.) So we were thrilled when Drew, the man we rented from, offered to pick us up at the airport.  It was particularly nice because he also explained the details of the apartment, pointed out local sites, gave us an extra key, and as an extra bonus provided us with cheese, lunch meat, bread and both beer and wine for a light dinner allowing us to just relax.

Our travels are never without glitches. The next morning when we left to pick up the car, we found that the key we had didn’t unlock the gate. So we called Drew who once more came to our rescue and not only provided us with the correct key but drove us to the airport to pick up our car! We thought we’d have another VW Golf which we really enjoyed but instead it turned out to be a Ford Focus. (Funny, few Americans in the Canaries, and we had an American car!)

The rental we had was perhaps the best we’ve had yet.

While the apartment was lovely, two bedrooms, newly redone and a beautiful view of the water, the best part was the community itself.  It is a small complex with only about 24 apartments, most of which are owned by UK residents (with a few others nationalities in the mix, namely Swiss and Bolivians) and so there is almost a sense of family among the residents and they were very gracious to include us in their circle.  Sandra and Kenny, a friendly outgoing couple from Scotland who now live in Lanzarote full time went out of their way to offer suggestions for our upcoming trip to Scotland, even asking their daughter to bring maps and brochures to help us plan.  On two different occasions folks celebrated their birthdays with food and conversation around the pool in the evening followed by the singing of Irish folk songs! And again, we were included in the festivities! We truly felt like we  had known these people forever! And there is no doubt this familial environment led to our warm feelings for the island itself. Everywhere we turned people were super friendly.

Lanzarote is a small island: 37 miles long and maybe 16  miles wide. But there is lots to see and do. The main roads are all very good, and there’s very little traffic making the island easy to tour. Even the “round abouts” are landscaped with gorgeous splashes of color. One “round about” even had a sculpture of camels!

Caesar Manrique was a local resident/architect who is largely responsible for developing tourism on the island and it truly is a model for the world. His influence is based on his love for the island and his desire to share it with others while maintaining as little impact on the environment as possible.   His home is built on the site of the volcanic eruptions of the 18th century and volcanic bubbles below ground have been made into different rooms of the home. His artwork is ubiquitous throughout the island.

One of Manrique’s sculptures honors the Campesino (Farmer) whose job is beyond comprehension.  Because of the desert like climate the vines are planted in pits surrounded by low stone fences that protect the plants from the wind and allow for the maximum moisture to be retained (primarily from overnight dew). These stone fences are everywhere and it’s hard to imagine what a tedious tiresome process it must have been to build them all. 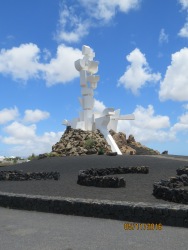 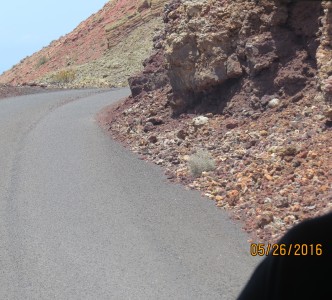 We definitely didn’t want to sit in the first row, and Bob’s comment on departure, “I hope this isn’t the driver’s first day” sort of summed up our feelings  But the views were spectacular. When we arrived back at the visitors center, chicken was barbecuing on a rack over the top of a volcanic steam pot!

Talk about efficient use of energy!  In the late 1400s camels were brought from Africa and today there are still caravans that tourists can ride in the Timanfaya National Park. http://www.discoverlanzarote.com/timanfaya.asp (No, we didn’t do it, but we were thrilled to be able to catch a glimpse of a caravan!) 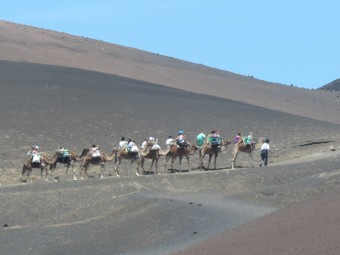 On the way back from the volcano we passed a salt pan.  At one time in the 1940’s Lanzarote had more than 20 salinas on the island but today there are still three that produce salt.  Many local recipes including Canarian potatoes call for salt crusts.

We particularly like to visit local markets and while many of them begin to look the same selling similar jewelry and leather goods, we found a few really interesting items. Cactus burgers (which Cary and Claudio are both really fond of) are a big item with a long line! Aloe vera is one of the main products of the island. They even have a museum dedicated to it.

There is aloe cream, aloe lip balm, aloe bath crystals, aloe for burns, aloe drink for digestive issues. There doesn’t seem to be any ailment it doesn’t cure.  (We did find however, that the aloe cream made mosquito bites disappear almost instantaneously!) We also enjoyed the local venders who sell their products of jewelry made from volcano rock and olivine, a lovely green gemstone found in some of the volcanic rock. We also liked the homemade jams and jellies as well as wine. And of real interest to us was the huge bag of saffron that sold for two euros! The real stuff?  Who knows?  We also visited an art museum housed inside a castle!  Very unusual, very interesting. 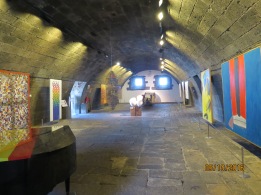 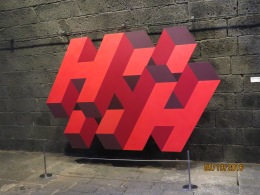 Puerto del Carmen, the main tourist town where we lived has a spectacular beach

(one of many on the island) with plenty of restaurants.  Again, we found friendly folks everywhere we went. Our favorite restaurant, Kristian’s, http://kristians-restaurant.com/en/was especially so.  Cary and her friend  Claudio were visiting from Rome and they immediately connected with one of the waiters who was from Italy. Whenever folks hear our American accent they immediately ask where we’re from and the staff at this restaurant was no exception. When it was discovered that we were going to spend much of July in Galway, Ireland, a waiter from Galway was sent over and not only offered suggestions but provided us an email address in case we had questions when we got there!  Another waiter was from Glasgow, and noticing Bob’s Bears jacket was proud to tell us that he played American football in Glasgow. The restaurant is small, seats only about 40 people so not only are reservations a must but the chef is asked when you call for a reservation if he can take another table at that time. You can even call ahead for a vegetarian meal which is made special for the diner! In addition, the chef interacted with us asking how we liked the food and commenting on what the waiters were saying.  A man at a table close by was celebrating a birthday which called for Celtic music played by the bartender on her violin!

It was a evening we shall long remember!

Usually when we leave the house, Bob and I have this routine:  “Do you have your wallet? The car keys? The apartment key?” (which was put in the door so we’d see it as we left). But one afternoon, for whatever reason, we didn’t do that. And lo and behold! Bob closed the door and then commented, “Now I’ve done it!” Yep, the door was locked and the key was inside. I had the combination to the key box on the outside of the door but as luck would have it, Drew had given me that key the night we moved in and it was still on the bookcase in the apartment…thus leaving the key box empty. Neighbor after neighbor offered suggestions. Perhaps the man who was doing work on the apartment would have a key. No, he wasn’t there.  Maybe if they tried a spatula on the door it would spring the lock. Nope we had secured both locks. How about climbing over the railing of the porch? No, we had locked that door too! Finally, we realized that the back window was open. So a ladder was found and Kenny (who is afraid of heights) climbed up the ladder to the second floor, a significant distance from the ground, and into the window!  Voila! Apartment unlocked! Talk about above and beyond!  We will be forever grateful!  And I’ve learned my lesson, when there’s a key box, ALWAYS MAKE SURE YOU PUT A KEY THERE IMMEDIATELY!

Perhaps one of the most memorable experiences occurred on one of our last nights. Bob and I had gone to a favorite restaurant near the beach, sitting outside sharing all that we had enjoyed in our last month. A middle aged couple and their teenage son were seated at the next table and inquired where in the States we were from. We began chatting about our adventure and they seemed genuinely interested. But I was astonished when the woman got out a napkin, wrote down their address and told us that they would love to have us stay with them if we’d like!  Talk about friendly! We were amazed.

Because our 90 days in the EU were up, it was time to move on to non-Schengen areas, so we bid farewell to our lovely new friends, many of whom we hope to stay in touch with, perhaps even meet up with, and move on to our next adventure.  We leave with many happy memories and truly understand why Lanzarote is called the European Hawaii!

2 thoughts on “Lanzarote: The European Hawaii”