Although I’ve been to the southwest several times we’ve never spent any length of time here and we’ve never visited in winter before.  I loved Tucson from first sight.  The saguaro cacti, the symbol of the West, are everywhere. They’re huge; some grow as tall as 40 feet and they’re gorgeous.  Our Airbnb is unusually expensive, the highest we’ve paid anywhere in the world, the rest of Tucson seems very reasonably priced. And we love our location.  We’re in the middle of a residential area with folks who appear to live here year round. It’s the weather that I’m loving the most right now.  I had been worried; our Michigan son and his family are flying in; our son from DC is coming; our daughter and her friend are making the trek from Italy, so when I saw that the typical temperatures are in the high 60’s I began to panic.  What if it’s really cold?  Someone on-line even commented that they have only had snow once on Christmas in the last eight years.  OMG, what if after paying horrendous prices for flight tickets, it snows?  But instead the weather is exceptionally warm…in the 70’s and 80’s.  Whew!

The house is fine for our large group.  The backyard a bit on the small side but the view of the mountains is spectacular and the pool is great and amazingly warm!  With so much to do, we don’t swim often. 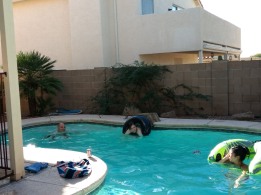 Checking out Trip Advisor online and then finding the nearest AAA office are among the first things we do when traveling to new places in the US.  We met a great clerk, Amanda, in the AAA office who went out of her way to help us.  She got out a map and highlighted her favorite places.  Gave us suggestions for things to see, places to eat, nice day trips. We want to do it all.

Mount Lemmon stands at over 9,000 feet and is the highest point in the Santa Catalina Mountains.  From bottom to top there are six climate zones, starting at the desert scrub and ending at the pine forest. And the rock formations are just as varied as the flora.  The winding road is very safe offering numerous pull-offs and the views are spectacular. Summer Haven is at the very top and we were surprised by the number of people we saw with sleds along the road. 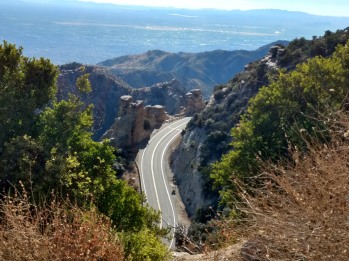 Given the rocky and forest-like landscape, I asked the clerk at the general store in Summer Haven  where people went sledding.  He looked at me like he had absolutely no idea idea what I was talking about.  I tried to explain, we saw lots of people with sleds in the snow, where do they sled?  “Anywhere they want,” was his response.  I guess maybe in Michigan we just take clear snowy hills for granted!

Two people had suggested we check out Bisbee Arizona, about an hour and a half southeast of Tucson.  We decided if we were going to make the trip we’d like to go a bit further to the border and see the wall. On the way down, we stopped at a remote gas station to fill up. 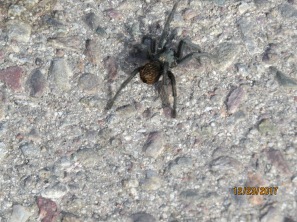 As we were leaving the parking lot, Patrick suddenly put on the brakes and backed up saying he saw something on the ground!  I had to jump out of the car to get a picture of possibly the biggest tarantula I have ever seen!  I had no idea that the wall or at least fencing dates back to 1993 between San Diego and Tijuana.  Then under W the Secure Fence Act was proposed in 2006.  And as of 2011 Homeland Security built 350 miles of pedestrian fencing and almost 700 miles of vehicular fencing.  Also, in 2011 it was decided to use more mobile surveillance and unmanned drones in attempt to provide security in a more financially efficient manner. Border security has obviously been the subject of disputes for years! About 30 miles from the border we could see something in the sky but weren’t sure what it was.  As we got closer I got a picture of it.  The US uses blimps to monitor the border.

As we came close to the border we could see the dark fencing in the distance against the sandy colored landscape.

We encountered border security vehicles at nearly every turn. But as we got closer to the fence it just felt  wrong.  All of us, except for Native Americans, are here as immigrants and to fence people out just seems to be contrary to all that we were taught to believe of American values.

Just a five minute drive from Naco, Arizona and the wall we came to Bisbee, an artsy mountain town.  Mining began here in the late 1800s and grew to be one of the richest mines in the world.  By the early 1900’s Bisbee was the largest city between St. Louis and San Francisco.  The open mining of copper began in 1917 and the mine operated until 1975.  After the mine closing, the hippies moved in and the town took on a creative folksy feel.  We parked the car and decided we needed to stroll the main street of this interesting downtown, filled with musicians, shops where the local artisans make jewelry…I found a ring made with local turquoise too pretty to turn down.  We also found  a great salsa shop.  We passed another store where they were selling local honey.  So much fun! 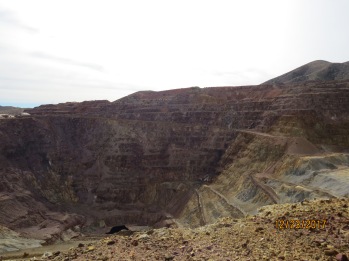 Leaving Bisbee we had to stop in Tombstone, the home of Wyatt Earp and the shootout at the OK Corral.  Dusty streets complete with boardwalks and stage coaches, it was about as cheesy as you could get.

We passed on the reenactment of the shooting but Cary and Claudio (her friend from Sicily) did have their picture taken with the gun fighters on the main street.  Claudio looked the part…perhaps in a previous life, Tombstone was his home!

And of course we had to stop at Boot Hill, a cemetery that had been ignored until a private citizen purchased it, cleaned it up and even provided a guide to the tombstones.  A couple of my favorites: Here lies Lester Moore, 4 slugs from a .44, no less, no more!  Or: Here lies George Johnson, hanged by mistake, 1882.  He was right; we were wrong, but we strung him up. Now he’s gone.  We’ve read online these are both fictitious, but they’re still fun to read! 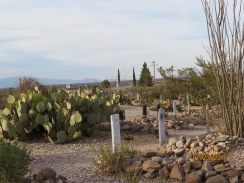 Nearer to Tucson, on a warm Christmas Eve Day, we enjoyed The Desert Museum which isn’t a museum at all but more like a zoo.  We had been told to make sure we got there in time to see the free flight Raptors and boy was that right.  We walked about half a mile down a dusty trail until we came to a woman who offered interesting information about raptors.  Then we, with about another 30 people, moved forward as a guide began to tell us about the birds we were going to see.  These birds are not tethered.

The guide described a bird, and then the bird would zoom over us so low we felt we could touch it.  Then just as quickly it would zoom to great heights coming back to a nearby perch where food was offered by other volunteers.  We saw a Peregrine Falcon, a barn owl, a gray hawk and a red tailed hawk.   We were absolutely captivated.

In 1949 CB Richards started a water co-op and built a residential neighborhood in Tucson known as Winterhaven.  He also started a Festival of Lights based on a neighborhood he had seen in Beverly Hills in the 1930’s.  Richards purchased pine trees to be placed at regular intervals throughout the neighborhood and had electrical connections installed at the base of each tree.  The festival has gone on every year since 1949 with the exception of one year in the 1970s when the residents voted to not have it due to an energy crisis.  I had read about the festival on line and purchased trolley tickets for us for Christmas Eve. 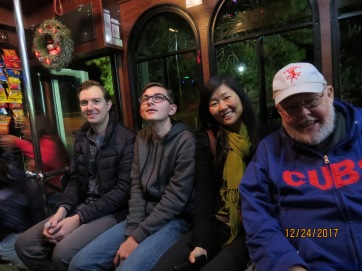 For an hour we gazed at more lights than I have ever seen.  We found ourselves turning from one side to the other and still unable to keep up.  There were Christmas displays, sports displays, cartoons, just about every theme imaginable.  We can’t figure out how people do this year after year…do they just add an additional tweek?  And how overwhelming it must be if you buy a house there.  The previous owner must leave his lights.  I’m not sure how it works but we’re sure glad we saw it!

Tucson has many many places with great Mexican food.  But two stand out as favorites: one is Mi Nidito http://www.minidito.net/  They don’t take reservations and we were there on a Friday evening. The wait was long but the group was really chatty and many were locals so we met some interesting people and  learned a lot about the area.  Our other favorite was El Charro. https://www.elcharrocafe.com/ 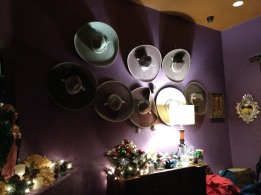 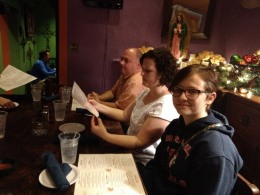 This is the oldest Mexican restaurant in the country that’s run by the same family.  There were nine of us and we had quite a wait for a table but again it was well worth the wait. We had our own room and the waiter explained everything in detail. He pointed out some favorites he had comparing them to food his grandmother made.  And of course, with our Italian guest we had to make a stop at Waffle House, a true American institution.  We didn’t realize the chain extended beyond the southeast.  What a pleasant surprise!

Javelinas (also known as peccaries) are sort of an icon for the area. We saw toy javelinas, Christmas ornaments with javelinas, stuffed animals, every sort of souvenir imaginable! We hadn’t heard of them.  They reminded us of wild pigs.  They are common to Central and South America.  We had read that they usually travel in groups and that they particularly like prickley pears.  Imagine the shock Kris and Andria must have had when they, along with their teenagers, took a morning walk around the neighborhood and came upon a live one.  Talk about up close and personal! 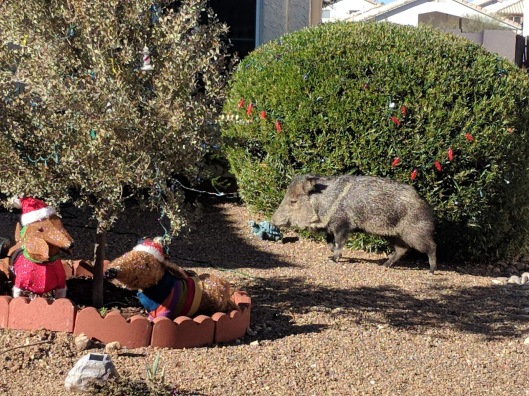 We spent one afternoon at Old West Tucson.  Many Hollywood westerns were filmed here with the likes of John Wayne, Clint Eastwood, Gary Cooper, etc.  We attended a short western play, went to a saloon show, took a train ride through the back lots and watched as stunt men staged fights and falls from tall buildings.

There is so much to do in the Tucson area.  We even spent an afternoon touring wineries.  What a surprise! Wineries in Arizona!  I think it’s a relatively new industry and most that we visited appeared to be run by young people who were friendly and eager to show off their distinct wines. 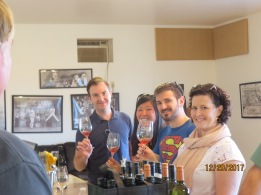 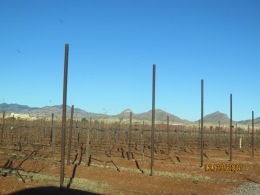 After a month in Tucson we were ready to head to Palm Springs.  It’s about a 2 hour drive to Phoenix and then another four hours to Palm Springs.  We decided to stop in Blythe California on the way. There was a storm predicted and because we are unfamiliar with desert driving we decided that we’d spend a second night in Blythe.  We were glad we did.  The rain was significant with ponding on the highways and leaving a lot of snow in the high desert.  I think the total rainfall from the storm was about half an inch but we are in the desert, not Michigan, and that’s significant when you get 5 inches or less in a year!

So nice to be in another warm location as we listen to horrendous weather reports from the midwest and east coast!  We are so lucky!

1 thought on “Tucson for the Holidays”