Before we left Lecce I received a notification from home that I needed to have a document notarized.  This turned out to be no easy task. It seems in Italy notarization is something really unusual.  Generally only documents involving a transfer of property get notarized and then it’s really expensive; usually a percentage of the sale. After searching high and low, we found that only at the US embassy or consulates would I be able to procure the signature required.  So, Milan, Rome or Naples? Rome seemed to be the obvious choice; it was the easiest to get to; we could see Cary again and we could drive through Tuscany and then over to the Ligurian coast and on to France.

We made the appointment on line luckily finding one slot left for the day we wanted. Even though it meant back tracking over roads we’d already traveled, we long ago realized that driving in the opposite direction on the same roads gives us a very different perspective of an area already traveled. 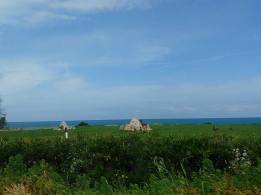 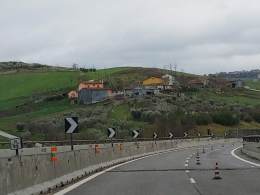 Service plaza food is very different in Europe; they have a variety of offerings we never find at home. In Italy: fresh squeezed orange juice, varieties of homemade pastas. 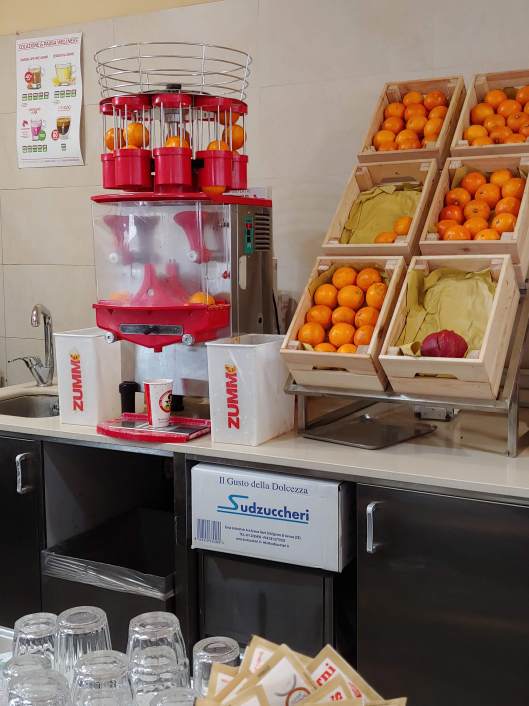 In France, the bakery items were like something out of a magazine. The drive over the mountains was lovely and we truly enjoyed the 6 hour trek back to Rome.

We had never been to the embassy area and because we were early for our appointment we wandered around the neighborhood and stopped and had a cup of coffee before proceeding into the embassy. 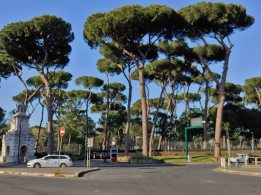 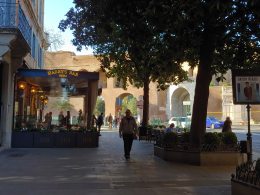 Although heavily guarded, the United States Embassy is truly a beautiful building.  We found once inside it was nondescript but the height of efficiency.  After we walked through security we followed directions to the second floor where we were given a number.  We were then called to a window and explained what we needed.  A bill was given to me for $50 and we proceeded to another window to pay.  Because it’s the US Embassy we could pay with a credit card, Euros or American dollars.  We then had a seat and were called back to the original window where we were met by the US Consul who watched as I signed the paper and then signed his own name and title and added his seal.  The Consul hesitated a moment when I asked if I could get a copy.  He then explained that the US Congress had passed a bill requiring the Embassy to charge $2.00 for copies.  And while that is a high price to pay to copy one sheet of paper, the fact that I wouldn’t have to wander the streets of Rome figuring out where I could make a copy made it indeed seem like two dollars well spent. Overall, this was a very pleasant experience and again it seemed exceedingly efficient. 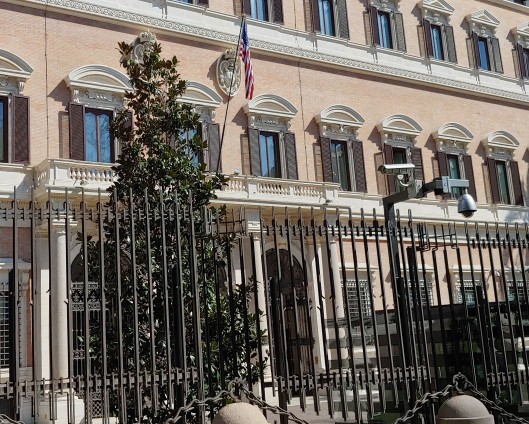 Later that evening we were able to catch up with good friends, who had invited us to dinner at their lovely home just outside Rome.  Although it is just the beginning of spring, their garden was just beginning to burst with bloom and we really enjoyed the few hours we spent with them. 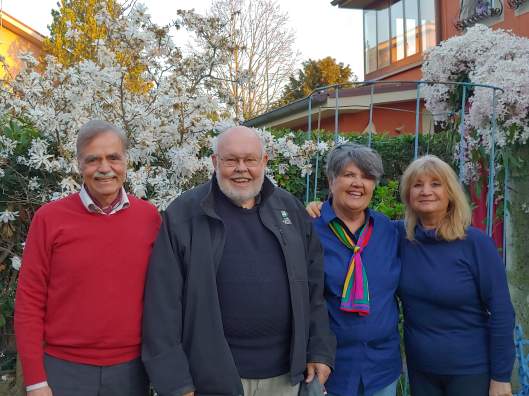 It was a pretty Saturday when we left Rome and Cary was able to drive with us as far as Chiusi, a lovely little hill town, where we stopped to have lunch. 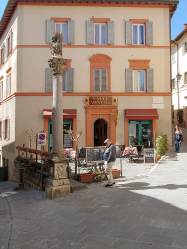 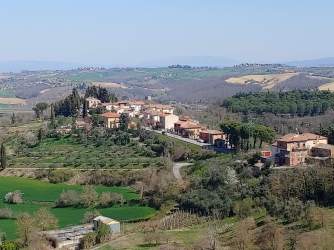 After dropping Cary at the train,  we drove on to Siena where we would spend the night. I have found it extremely helpful in unfamiliar towns to search Google Maps for parking near our destination. That seems to help us get our bearings when we enter into new congested locations. We found the parking lot in Siena easily enough but trying to figure out how to pay was another story.  The ubiquitous parking machines we’d seen throughout Europe were nowhere to be found. We finally just gave up and walked to our hotel, a few blocks away, passing through an interesting street market along the way. We later found out that the lot was free! That never occurred to us! 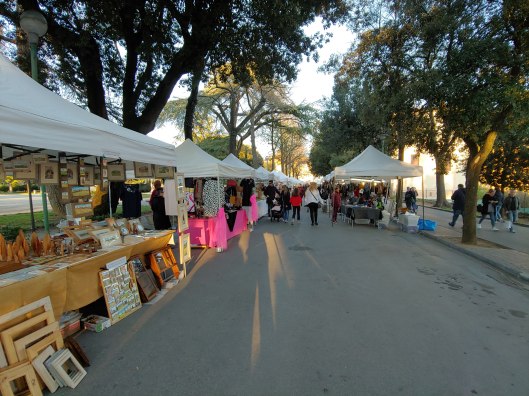 Our plan when I made the reservation in Siena was to use that as a base to go to Florence, a city I really love. But instead we fell in love with Siena and decided to spend our day extra there.   Siena is a town of gorgeous medieval (read 5th – 15th century) buildings. 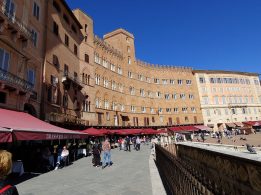 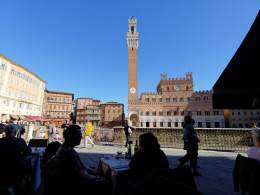 From Siena, we continued up the coast to Savona, our last stop in Italy. We continue to be amazed by the size of so many of the cities we encounter which we’ve never heard of. Savona, for instance, has a population of more than 280,000. We arrived just at dusk a lovely time for a walk along the marina. 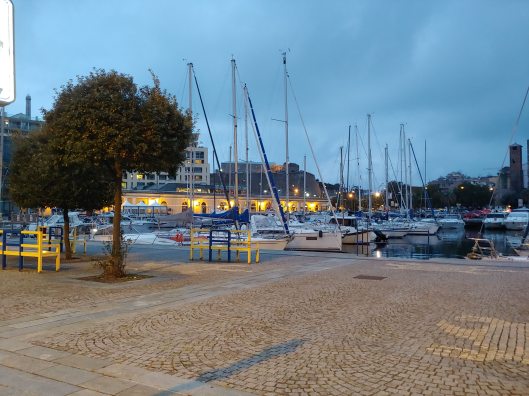 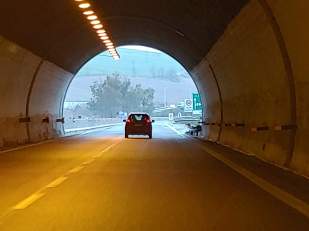 The next morning we crossed into France following the coast lined with more tunnels than we could count.  Bob has the habit of calling out“Tunnnnneeeellll” in the same manner as a soccer coach announces a “Gooaalll!” but when he began to lose his voice because of the limitless number of tunnels, he gave it up! It’s only a couple hours drive from Savona to Antibes. We are staying in the old city which is closed off to cars. Our host had directed us to a parking garage close to our apartment.  He had also arranged for a friend to meet us at the apartment who graciously helped us lug our suitcases up to the second floor. (Americans, read that as third!) It’s a pretty spartan, well-worn abode, with a few details left out of the Airbnb description, but the location is perfect. And there’s a cute little restaurant just below us that’s a great stop for a cappucinno! 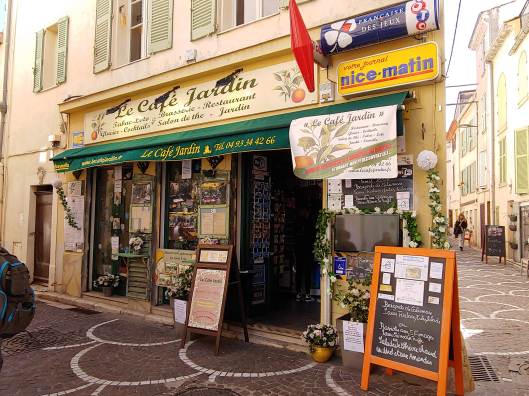 Antibes is a good base for us.  It’s close to Provence and day trips. It’s also just a half hour away by train to Nice.  It’s not crowded this time of year and we’re finding many interesting places to walk. Of course, we first had to check out the local market. 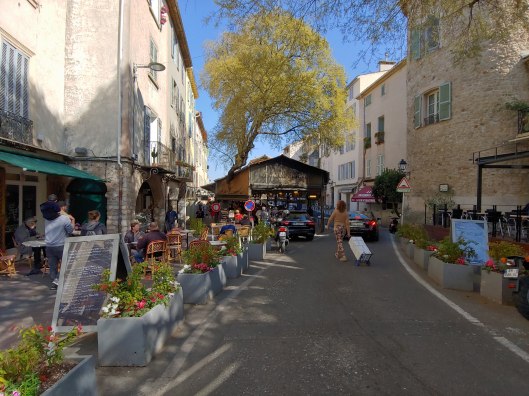 In many ways they’re all very similar but we never tire of the fresh vegetables, spices, cheeses and fresh flowers. 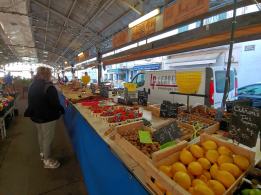 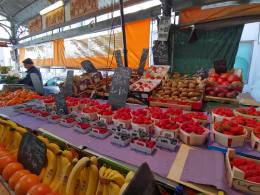 This one was a bit different because it was covered and had a more permanent feel than many we have visited And the windows of the bakeries were filled with unbelievably beautiful pastries.  The meringues had to be six inches long. 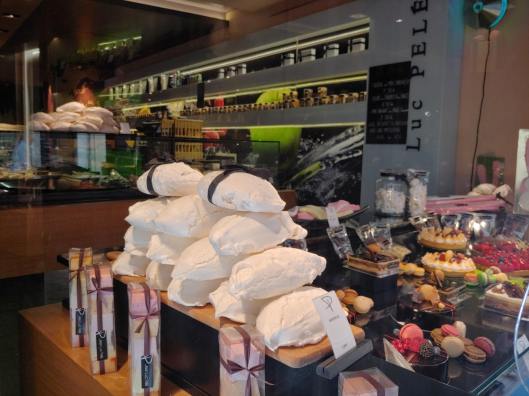 It’s easy to get turned around in the windy old streets of Antibes and we found ourselves at the Ramparts just along the water after we left the market.  The backdrop of the snow-capped mountains in the distance against the blue water with the multimillion dollar yachts in the foreground was like something out of a movie. 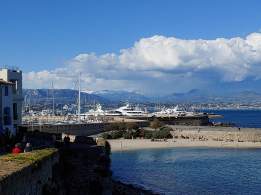 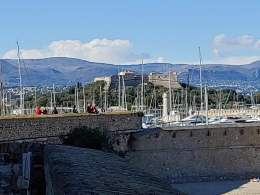 I’m sure we’ve been on ferries that were smaller than some of these yachts! Also, along the harbor we love to sit and watch people play boules, a lawn game similar to bocce in Italy. 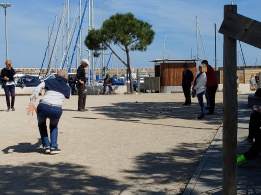 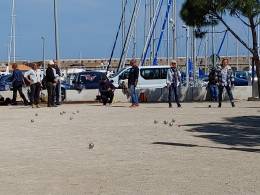 We took a day trip to Nice.  The Chagall Museum is particularly interesting as the artist helped design the building.  It is a small museum and my favorite part was the huge mosaic glass in the auditorium. 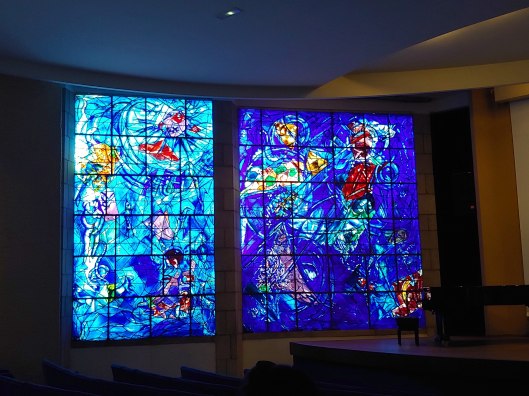 We learned early on in our travels to take advantage of audio guides in an art museum whenever they are available.  They were particularly helpful here as Chagall’s work is highly religious and without the additional explanation I would have found it very difficult to understand.

Later in the month I returned to Nice with my friend Rita and we visited the Matisse Museum.  I had read in other reviews that this museum was disappointing because most of his works are located elsewhere. I’m certainly a novice when it comes to art, but I enjoyed the paintings, drawings and found the details of his life particularly interesting.  Again, the size made it doable in a couple of hours.  We really enjoyed it! 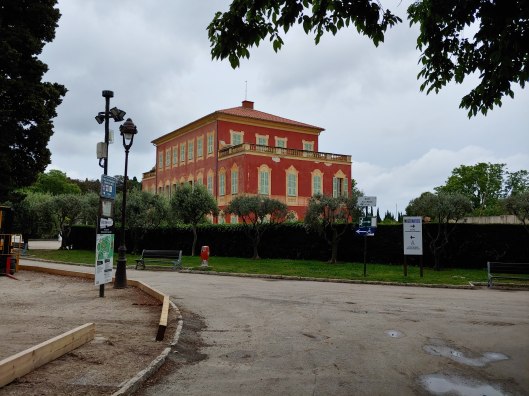 We also enjoyed the walk through Nice’s huge market and then wandered over to the Promenade des Anglais with its great views and the opportunity to just sit and people watch.  It’s amazing the number of different languages people spoke, each with a joyful lilt in their voice. 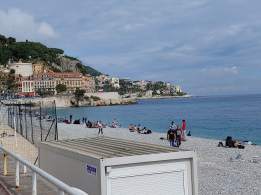 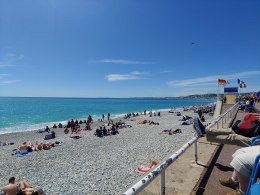 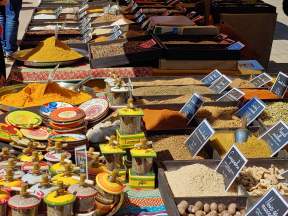 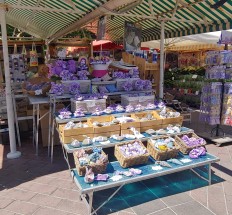 Of course, since this is France, the food is scrumptuous.  Wherever we go throughout Europe, it seems that everyone takes an afternoon break and enjoys a glass of wine, a stein of beer or the most recent craze, a spritz.  The spritz is a bit on the expensive side costing about the same as two glasses of wine, but it has lots of takers.  It’s a combination of aperol, prosecco and club soda.  And as folks often comment, it does look like a bright orange sunset! 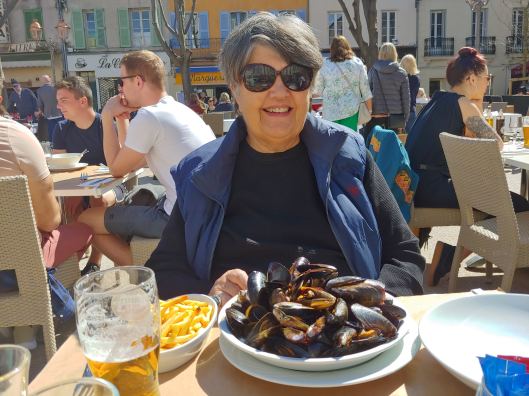 Another advantage of being right on the sea is the seafood!  I particularly like the mussels.  And wow!  The portions are huge! Sitting at a table in a busy square just makes everything taste better!

Public transport here is great and easy to figure out.  In Nice, in addition to the bus system, there’s an efficient tram that gets you to many of the more popular destinations within the city. But as we boarded it to return to the train station, a voice over the speaker told us that this tram was not going further and everyone should get off. It made no sense. No one around us spoke English. Finally a gentleman explained that there was some sort of strike.  Ok, it was about 2 kilometers back to the main station and it would be easy to find our way; we could just follow the tram tracks.  Not far after we set out, we began to hear singing.  Then we figured it out!  This was a yellow vest protest; the marchers are protesting throughout France the inequity of wages.  We were fascinated as we watched the paraders chant, sing, and throw an effigy of French President Macron up in the air.  It was all very peaceful and we never felt anything but safe.

As we passed a McDonalds we stopped to watch the procession.  At this point I realized my phone was nearly dead so I asked Bob how much battery he had left.  I watched as he reached in one pocket and then another but no phone.  He had put it in his zipped front jacket pocket but it was definitely not there now.  It finally dawned on us; he had been the victim of a pick pocket! As he began to recall earlier events of the day, he thinks it happened on the short trip we made on the tram when we first arrived.  In any event, it was gone.  What a pain.  On the other hand we were very lucky.  As hard as it is to lose his phone, in his other front jacket pocket, also zipped, was his wallet, with all his identification and credit cards.  That would have been a much bigger hassle.  I immediately cleared the data from his phone and then notified T Mobile that the phone had been stolen and to block any further use. Most of his apps and pictures are synced to his computer which made life a bit easier. And so far, no other repurcussions.  Keeping our fingers crossed.

We thought we had been cautious.  I even turned my daypack around and wore it in front of me on the tram, but it appears we can never anticipate all events. We were determined not to dwell on it.  After notifying our kids that Dad would not have a phone until we returned to the States, we just moved on.

We still had lots to do and see!