We left Portland, Maine, on a gloomy morning heading for eastern Pennsylvania, about a six hour drive. Bucks County is an artsy area about an hour and a half west of New York City and 45 minutes north of Philadelphia.  While we had driven through the area on our way to other destinations we’d never spent any time there. Because of the proximity to the large metropolitan areas it tends to be a really pricey area to stay so we decided to spend two weeks there instead of our usual month. Finally after much hunting I found the perfect place in New Hope. By the time we arrived,  the sun was shining and the temperatures were in the low 70’s. Not bad for the first of November. Our VRBO abode was billed as an English Cottage and was located in what was created as a Gothic English Village by artist and architect Morgan Colt at the turn of the 20th century.

While pretty tiny it was absolutely perfect for us. It had a small galley kitchen at the end of a fairly large room that had a queen size bed and a couch, dresser, bookshelves and a television (and also a great wifi connection).

Our host, Eleanor, and her adult son, Kurt, live in another cottage close by.  Kurt walked us through the village that they’re trying to recreate providing us with a lot of history along the way. As we passed through huge iron gates, we came to “The Inn at Phillips Mill.” Because it was Bob’s birthday, we thought this would be a great place for dinner. Wow! We were seated in the upstairs room that held only four tables. The menu was lovely and reasonably priced. We ordered croquettes de Crabe Remoulade as an appetizer and then Bob had the steak ‘black Angus’ et Sa Sauce Au Vin and I had the Salmon Poche Florentine. Yummy! While the restaurant doesn’t have a bar, we were told that we could bring our own wine and they’d open it for us. So that’s what we did! (It turns out to be much cheaper that way, as well!)

Unfortunately we had a lot of rain during our stay.  In fact, on one of our first nights we were a bit alarmed when a tornado warning came across the crawl on our television. This wasn’t a watch but an actual warning for our location. I texted Kurt who promptly responded that we shouldn’t worry, that although they did from time to time have tornado warnings none had touched down in the past twenty years they had lived there. His response really surprised us; we are MIchiganders; we take tornado warnings seriously! I suggested in my comments on the VRBO site that they create a plan for future warnings and hopefully they will heed the request. But ah! The optimism of youth!

New Hope is located right on the Delaware River Canal which runs for 60 miles from Easton to Bristol. The canal, modeled after the successful Erie Canal in New York, first opened in 1832 and was built primarily to carry anthracite coal as well as gravel, limestone and lumber from northeastern Pennsylvania to Philadelphia. Then in reverse it would carry finished products from Philadelphia back to the northeast. The canal was the busiest before 1855 but continued in operation until the 1930’s. Because of construction on a highway bridge much of the canal closest to us had been drained temporarily.  Today the tow path next to the canal is a popular place for hikers and bikers. 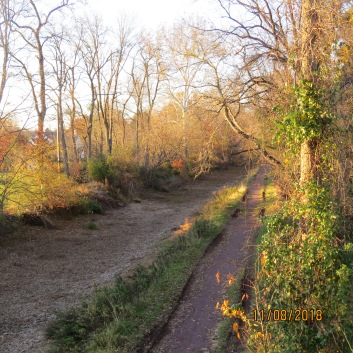 Bucks County is known for its art galleries, antiques, covered bridges, and their playhouse.  We had missed the juried art show that was right in New Hope but we learned about the MIchener Art Gallery in Doylestown, about 20 minutes away. Doylestown is the home of James Michener and in 1988 he transformed the Bucks County Jail into an art museum that features the work of the Pennsylvanian Impressionists. And while we enjoyed the art, it was the George Nakashima Reading Room that I found most interesting.

George Nakashima was born in Spokane, Washington.  After getting a bachelor’s degree from the University of Washington and a master’s from M.I.T. he travelled all over the world studying woodworking.  When he returned to the United States in 1940 he began making furniture and teaching woodworking in Seattle. During World War II he was incarcerated in a Japanese camp in Idaho. In 1943 Antonin Raymond sponsored Nakashima’s release and invited him to live on his farm in New Hope.  Although at the time Nakashima could only do woodworking as a hobby because the conditions of his release required him to work as a farm laborer. Eventually he built a home, studio and workshop in New Hope. We learned that his workshop is open to the public certain days of the week.

Nakashima had a dream of Altars for Peace for each continent of the world, believing that these meditation centers would make the world a better place. Today these altars continue to be designed by the Nakashima business even though George died in 1990. What a serene, peaceful location this is for such work! In the workshop we saw many samples of his designs as well as the work of those who are carrying on his business. We were also surprised to find his son, Kevin, sitting on a chair and interacting with the many visitors.

Bucks County Playhouse is a place where many famous actors got their start. The playhouse, which originally was one of the Hope Mills, dates from the 1790’s.  After most of the mills were destroyed by fire, this one was saved from demolition in the 1930’s and purchased by a group of playwrights.

In 1963 Neil Simon’s, Barefoot in the Park premiered here starring Robert Redford and Elizabeth Ashley.  While we were in New Hope, I Hate Hamlet was playing and Elizabeth Ashley was billed as one of the stars.  I had found a groupon ticket for a reasonable price and we were flabbergasted when we realized our seats were in the sixth row. What a fun afternoon!

Adding to the nostalgic feel of the area are the covered bridges. Nowhere have we traveled where we’ve seen more than Bucks County. They even have a brochure that describes and gives directions to the 13 in the county. We set out to see a few of them.

The four we visited were all built in the early 1870’s (although county records indicate one of them was built as early as 1832) and ranged in length from 56 feet to 130 feet long. The colorful fall leaves only added to the nostalgic feel!

Before leaving the area we decided we wanted to visit Princeton, New Jersey. We began by visiting the Princeton Battlefield State Park where the Americans and British fought on January 3, 1777.

We then went on to Nassau Hall on the campus of Princeton University. Nassau Hall was built in 1756 and at the time was the largest academic building in the Colonies. This is where the British surrendered and where Congress congratulated George Washington on his successful termination of the Revolutionary War.  The first foreign minister to the United States was welcomed here!  I can’t imagine what it must be like today to attend class in such an historic building!

Albert Einstein’s house is not far from the campus.  After leaving Germany during World War II, Einstein continued his work at Princeton and lived at 112 Mercer Street from 1935 to his death in 1955. The home is presently a private residence.

Our final stop in Princeton was the Princeton Cemetery.  The cemetery is owned by the Nassau Presbyterian Church. Politicians, musicians, academics: so many people from American History are buried here. Among them: Stephen Grover Cleveland, (22nd and 24th President of United States) Aaron Burr, Sr. (the second president of Princeton), Aaron Burr, Jr. (vice-president of United States), Jonathan Edwards, (“Sinners in the Hands of an Angry God,”), George Gallup (pollster), Paul Tulane (philanthropist of Tulane University). 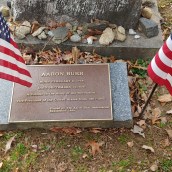 As Bob stopped to let me go exploring among the graves, I was stunned when I got out of the car.

There next to me was a large monument. The family name? Hendrickson! I took pictures, just in case as we learn more about Bob’s family history some of those names show up!

Just two weeks earlier we had arrived in Bucks County on what seemed like a summer day. But now he weather forecast predicted a massive snowstorm heading across Pennsylvania on the day we were to leave so we decided “just in case” to get in front of it. Next stop:  Pittsburgh, the Steel City and home of the Pittsburgh Penguins! Can’t wait!