We left Belfast on board the Stena ferry bound across the Irish Sea to Scotland. Ferry travel, on calm days, has become my favorite form of public transportation.  There’s plenty of room to move about and your luggage is checked (without charge) when you board. The two hour crossing was pleasant enough going from sunny to cloudy by the time we arrived in Scotland. From there we took a coach to Ayr, a small resort city sitting at the  the River Ay spot where it flows into the Irish Sea on the west coast of the country.

Unfortunately it was cold and windy in Ayr and by the time we arrived at our Bed and Breakfast the rain had begun and the beach didn’t seem very appealing. Nevertheless, we took a walk to the ocean front and found a small wonderful local restaurant for dinner.

The Bed and Breakfast, which would be our home for the next two nights had a comfortable large living room with a bar in the corner.  We enjoyed chatting with a group of four men from England who were staying there while they were working in Ayr replacing seating a local theatre.  The owner was an interesting lady who said she always wanted to own a B&B so after her sons grew up and left home she bought the Arrandale Hotel .  She seemed to be a one-person show checking guests in, doing the cooking and in charge of the cleaning as well. The weather was cold enough that we didn’t hesitate when we headed upstairs to bed but hurried into our pajamas and jumped beneath the covers to get warm.  And this is August.  Wow!  What must their winters be like! We do wonder how often it is that folks get to use the Ayr beach for sunbathing!

Alloway is just two miles south of Ayr and was the home of Robert Burns. So off we went in the morning to the Robert Burns Home and Museum. We walked a short distance to the bus stop and must have looked unsure of ourselves because a gentleman who is a curator at the museum asked if he could help us and showed us which bus to take and also where to get off!  The home is a modest place that dates from the early 1760s.

We walked from the home to the museum and past the bridge,  Brigadoon, that was mentioned in the final verse of his poem, Tam o’ Shanter.     When we entered the museum there was a group of young girls performing Scottish dances.  Interestingly they were from Canada and on tour.

In the museum itself we learned a lot about Burns and his personal life (He was quite the ladies man!) and how he had great influence on many American writers including: John Steinbeck, James Whitcomb Riley and JD Salinger. In the light rain we continued on to the Burns statue and then the churchyard where his parents are buried.  Even though the day was cold and rainy it sort of fit with what we expected of Burns’ Scotland. Imagine our surprise when as we waited for a return bus, the gentleman who had given us directions in the morning was at the same bus stop for the trip back.  He explained that he had been to the Scotland Cricket Match. We told him that we didn’t know much about cricket but it was the scoring we found particularly difficult to figure out.  He told us that sometimes cricket matches can go on for three or even four days.  That was enough to convince me that perhaps I didn’t need to understand any more about the sport!

The next morning we boarded a Scotrail train for Inverness in the Highlands of northern Scotland.  The check in with our Airbnb was a bit unusual because no one met us or even connected with us but once we figured out the key and let ourselves in we found the apartment to be very comfortable and in a great location. We felt a bit silly when we asked our taxi driver the name of the river next to us and he responded, “The Ness.”  Ah yes, the town was Inverness.  Made sense!  We had been warned that northern Scotland in general, and Inverness in particular would be cold.  But again we got lucky with the weather and while we had some rain, generally our weather was in the high 60s to low 70s, very comfortable indeed. We had learned by this time that whenever we ventured out to put our rain hats and umbrellas in my day pack just as a matter of habit. Inverness is a lovely city with just less than 50,000 residents.

Inverness Castle is a red sandstone structure that is perched over the city. Although this castle was built in 1836 it is situated on the site of an 11th century defensive structure where Macbeth supposedly killed Mael Colium III’s father.There’s also an interesting local museum that helped us better understand Scottish history. But most of all Bob and I enjoyed walks along the river. 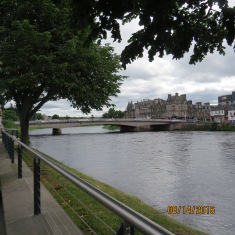 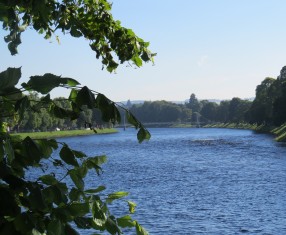 We decided that since our daughter Cary and our son Patrick are going to meet up with us next week in Edinburgh that we would wait to make the trip to Loch Ness with them.  In the meantime, Bob checked out other coach trips and suggested the trip to the Isle of Skye. The coach trips we’ve taken since we arrived in Ireland are usually very reasonably priced and the drivers and/or guides are very knowledgeable and provide an interesting and enjoyable day. We walked to the bus stop in Inverness, about 15 minutes from our apartment. Once again we were lucky with predominately sunny skies. For eight pounds each we were provided with sack meals for lunch and supper. The twelve hour tour took us from Inverness, the capital of the Highlands, across the northern section of Scotland through glens and over mountains to the Isle of Skye. The heather I’ve read so much about in Scottish novels was particularly pretty.

And then there’s the ubiquitous sheep… The guide explained that it is imperative that sheep are sheared as the wool becomes very heavy. And if the sheep aren’t sheared they’ll die because they can no longer get up.

But because the sheep were absolutely everywhere we looked, we wondered how the farmer ever rounds up his flock.

One of my favorite stops was Kilt Rock named because of its likeness to a kilt and features a waterfall of more than 180 feet. 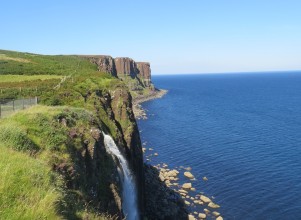 Standing also at the site was a bagpiper.  The music seemed so appropriate in this setting. We also passed a school ferry on the Isle of Skye.  Imagine what it must be like to travel for several hours via ferry to school.

Some students, we were told, stay the week in order to not have to endure daily treks.  I’m sure it saves a great deal of money as well. From Skye we could see the Outer Hebrides. One of these islands is Harris Island which is where Harris Tweed originates. We passed brochs (prehistoric Scottish hollowed wall structures) and medieval forts and castles. We learned about the bloody battles of the clans. We even traveled down a single track road to the Faerie Glen, but because the faeries shy away from the sun they stayed hidden from us. We visited Portree a busy fishing port with multi-colored houses. 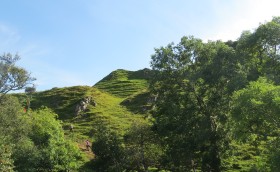 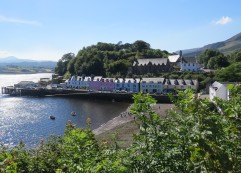 Everywhere we turned there was a loch or mountain view more beautiful than the last. 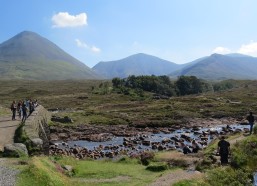 When we arrived back in Inverness we stopped at a local bar on the way home for a beer and some Scottish music.

The next day it was time to leave northern Scotland and head down to Edinburgh.   It would be less than a four hour journey and we looked forward to seeing more of the Scottish countryside.