I’m not sure how we would have managed everything without all the help of good friends and family.  Christmas was extra crazy! We celebrated Christmas Eve traditionally with games and hors d’oeuvres at our home, and Christmas morning we spent with our son and daughter-in-law’s family with a fabulous breakfast followed by gift opening. (A robotic family dog? How cool!) After a fabulous Christmas dinner, we participated in a family euchre tournament and headed early to bed! On the 26th we got up and managed to complete all the final jobs: washing bedding, last minute packing, etc. Again our son and daughter-in-law’s family put up with us. We headed back over to the house early Saturday morning to meet up with the Wonder Women Crew who were hauling all our stuff to Lansing for our estate sale early in February!  What an efficient group they are.  A crew of 12 immediately set to work sorting stuff for charity and stuff for sale.  A friend had brought his truck and trailer to haul stuff to local charities (given that we live in a small town where charities only schedule pick ups a few days a month). I lost track of the number of trips, but if it hadn’t been for friends and family, we’d still be unloading the stuff. And the rain gave us an extra challenge!  By late afternoon the house was empty and we were exhausted! We texted the new owners we were out and wished them many happy memories in their new home!

Sunday morning after some emotional goodbyes to family and friends, we started off for the first stop on our adventure.  We are a family of avid hockey fans so when Ferris State was selected to participate in the Great Lakes Invitational in Detroit, we knew we wanted to go!  The Joe Lewis Stadium became our first stop.  Ferris lost game one to Michigan State 2-1.  Okay, disappointment, but we we still had Monday’s consolation game! What a devastation that was when we lost 6-0.  With little interest in watching Michigan play Michigan State in the finals, we decided it was time to give up on hockey for the weekend. Because we are West Michiganders with a Chicago orientation we know very little about the Detroit area but found the People Mover to be a great asset transporting us from the arena to Greek Town in just a few minutes. (We did find it a bit disconcerting to think that we had just ridded ourselves are virtually all of our belongings and had the rest of it with us in the car that we were parking in a garage in Detroit with virtually one of the greatest crime rates in the country!)

The weather was unseasonably dry for our drive from Michigan to Virginia.  The owner of our condo was waiting when we arrived in Alexandria and was extraordinarily friendly and helpful.  The condo was just as we had viewed it on Airbnb and within an hour or so we had unpacked and settled in. What a relief! We headed to Rockville MD to spend New Years Eve with our second son’s family! What a great time we had!

We were particularly pleased when the weekend brought nearly 70 degree weather.  We decided it was time to go exploring.  Wandering Civil War battlefields is an interest both Bob and I share so on the weekend we headed to Fredericksburg.  I think we often forget the horrors of that time.  A monument erected by the State of South Carolina honors a South Carolinian soldier who offered water to the wounded and dying enemy soldiers was particularly moving 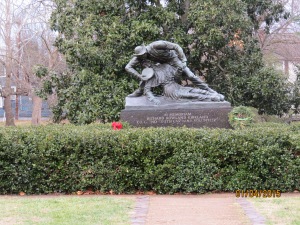 Fredericksburg is a lovely little town and we were impressed that they chose to remember the atrocities of a previous time instead of hiding them. At the corner of Williams and Charles Streets, we were amazed to find a remnant of the auction block where slaves were sold during a previous, but not so distant past! 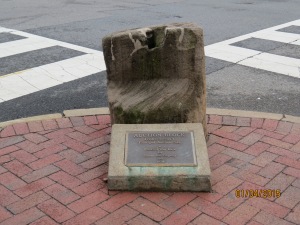 The weather has since turned cold, but we’re used to that. The hard part, we think, is behind us: we’ve sold the house, our “stuff” is down to manageable suitcase size, our dog has a new home, our kids took those things that were hard to part with and we have a budget to work with. We’re beginning to feel comfortable using the Metro, we’ve found a local team trivia game and we’re learning our way around the area and look forward to exploring more “off the beaten path” locations in the next couple of months. Then who knows where!

1 thought on “Transition from Michigan to Virginia”