After a long weekend in DC we were ready to head to Europe. Folks were already talking about school, business and government closings because of the snowstorm headed to the east coast.  We were scheduled to fly out about 8 hours before it started and luckily our flight was on time and the forecasts proved accurate as well.  The trip was uneventful but when we landed in Iceland we couldn’t deboard because of the high winds. Finally, the flight staff said we’d have to walk across the tarmac to the terminal and advised us to be very careful going down the stairway. We felt like we were going to get blown off our feet. I like the Kevlavik airport as it’s manageable and not huge, although I’m never sure what time it is.

We left on US eastern standard time and will arrive in Europe 6 hours later so in Iceland we’re somewhere in between.  Most people have the same bewildering looks on their faces; sort of like being in the twilight zone.  Luckily, the winds were short-lived, and we were soon on board for the second and last leg of our trip.

Rome is fun!  And it’s even more fun because we are lucky enough to have a daughter who calls the city home.  Cary had arranged a luncheon for us to meet some of her colleagues where she works at the Food and Agriculture Organization of the United Nations. I was overwhelmed by the ease with which this bright energetic group, folks originally from many places around the globe including: France, Croatia, Italy, Portugal, Spain, and Malta, conversed in English. Given that they all live in Italy, that makes them AT LEAST tri-lingual. After lunch we headed to the terrace for a coffee.  I can’t imagine how anyone could ever get used to seeing these views every day!

As one person pointed out, on particularly stressful days, it can’t hurt to have a direct line of sight to St. Peters!  Rome, like all of Italy, has amazing food.  In the evening we met up with a friend of Cary’s to have dinner atop the Mecenate Palace Hotel in the Roof Top Garden of the Terrazza Dei Papi Restaurant.  The place had been recommended by one of Cary’s colleagues and the chef himself greeted us, and served us aperitifs on the terrace with spectacular views of the surrounding area. 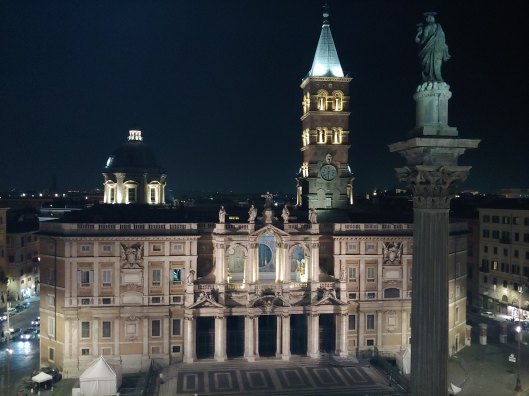 Then inside he offered suggestions for dinner catering to our every whim.  It was an experience we’ll never forget. 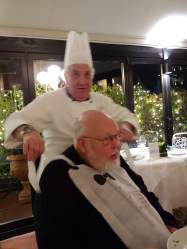 The next morning we picked up our leased Peugeot and started on our way to the heel of Italy.

People often ask how we decide where to travel to next. And truthfully, it’s pretty random. We read something or people we meet along the way give us suggestions.  Last year when we were attending a party to celebrate Cary’s completion of her doctorate, we had a great conversation with her friend Davida.  Davida is from Rome and told us about this beautiful city, Lecce, in the heel of Italy not far from the Adriatic coast. He told us how as he was growing up, he enjoyed many summer vacations in the area.  He referred to Lecce as the “Florence of the south.” After researching it a bit, we realized that we didn’t want to try to negotiate the area during the summer and its bumper to bumper traffic.  We also didn’t think we could afford the summer rental prices. So as we often do, we opted for a month during the shoulder season.

The drive from Rome to Lecce had appeared to be long including travelling over the mountains. I had therefore decided to make reservations at a bed and breakfast in Benevento, which appeared to be about half way. And while it was much closer than we had expected, we suddenly found that we had left the sunny weather in Rome, and now high in the Apennines we were beginning to see snow in the air.

I had opted for a bed and breakfast instead of an Airbnb because we hoped to meet up with some other travelers.  Unfortunately, when Emilio checked us in, he showed us to our lovely room, but there was no lounge and when I inquired about breakfast he told us that everything we needed was right there in the room and that he would also deliver fresh croissants to us in the morning, a really nice touch, but we were disappointed in the isolation. As I have mentioned in earlier blogs, we do not travel with a lot in the way of warm clothes so after wandering around the city for a short while, we headed back to the bed and breakfast. And then only ventured out a few hours later to find a place for dinner. And this is Italy, so of course we found a wonderful place!

Sunshine greeted us early the next morning and we headed down to the parking lot a few blocks away where we had parked our car the day before.  Oops…it was a Sunday morning and while we could access the car from the pedestrian walkway, there was no parking attendant and absolutely no way of getting out of the chained parking lot. Hmmm…what to do?  Few locals spoke English; it was a Sunday morning with few people around… then all of a sudden there was a man at my window with a paper, showing me how much we owed. A few minutes later, I got a text from Emilio saying he understood we had a problem getting the car from the lot and inquiring if we needed him to come down and help us.  We have absolutely no idea how he knew we had a problem.  Crazy!

In early afternoon we reached Lecce. Francesco, the man we’re renting from, had arranged for his sister and niece to meet us and help us manage our luggage and get checked into our apartment.  The place is absolutely gorgeous! It was formerly a palace, owned by relatives of Francesco’s wife and has since been subdivided into beautiful modern apartments.  We’ve stayed in some lovely places in our four plus years of traveling, but this is definitely a WOW! The building itself dates from the 1500’s and we are on the top floor with a view of the Duomo of Lecce!  The ceilings must be 20 feet high. Many of the furnishings are antiques including beautiful Persian rugs and a hand painted cabinet that holds a record player. The vestibule alone is large enough to be a bedroom. 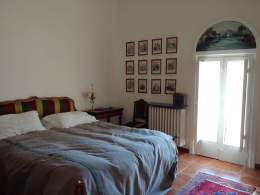 The kitchen has high end appliances and there’s a dining room off the kitchen. Then down a few steps to the entryway, living room with fireplace and a cupboard which is so large we can’t imagine how they got it up to the top floor and inside the cupboard is a television monitor.  There are two bedrooms with a bath off the the main bedroom and another full bath off the dining room. There is also a washer and fast wifi. Airbnb you’ve done it again! Absolutely wonderful location, apartment and views. Perfetto! As you can see there are a few steps, but the apartment and its views definitely made them worth the trek! 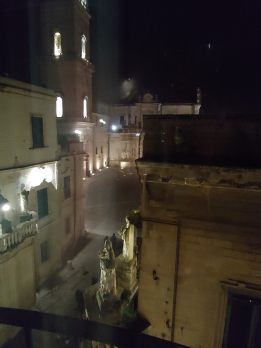 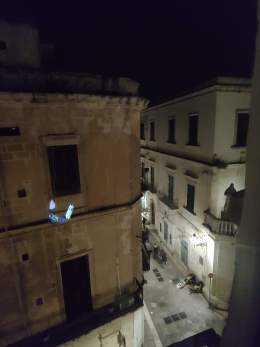 As I have mentioned in earlier blogs, Bob and I love the church bells in Europe.  They chime the time; on Sunday mornings they seem to ring from all corners of the city.  But we’ve never lived in a location where we could actually stand on our terrace and watch as well as listen to them chime.  See what you think…

We dropped our stuff off and went out to get aquainted with the neighborhood. Francesco had conveniently left a list of some of his favorite restaurants and one in particular seemed close by so after exploring a bit we stopped there for dinner.  We had forgotten how late, by American standards, the Italians eat so when we arrived we were told that only part of the menu was available until 8 pm. That was fine. We ordered some wine and sideboard of meats and cheeses.

Holy moly! We could have fed our entire family with that side board. This restaurant, The Double 00, turned out to be our favorite in all of Lecce, and we returned several times during our stay. Great food, great service, reasonable prices and close by our apartment.

We headed back to the apartment, tired after a day of travel but definitely looking forward to exploring the rest of the area. We feel lucky to have found this little piece of Italian heaven!

3 thoughts on “Italy Part I: Rome and on to Lecce”